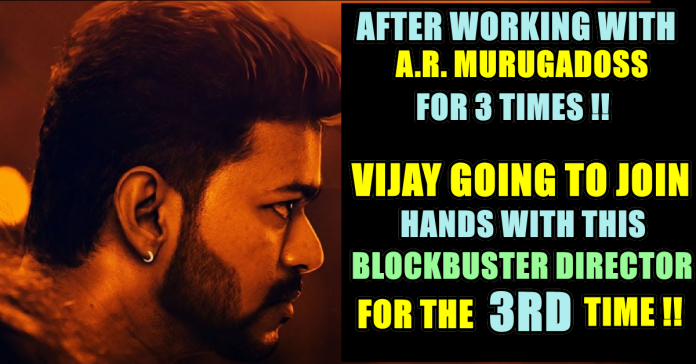 Social media has been abuzz with news that actor Vijay will be joining hands with director AR Murugadoss for what will be their third collaboration. Their last two movies together, Thuppakki and Kaththi were met with great success at the box office.

The film titled as “Sarkar” and its first look released recently created a big time controversy because of the actor holding a Cigarette in his mouth. Dr. Anbumani Ramdoss wrote a series of tweet against the first look demanding the Actor not to lead youngsters in a wrong way by smoking cigarettes in promotional posters. The latest update we hear from reliable sources is that Atlee is completing his new script and he is teaming up for the third time with Vijay!  And in all chances it will be AGS Entertainments who will be producing this biggie. Thalapathy Vijay and director Atlee have forged a blockbuster combination after their back to back outings Theri and Mersal struck gold at the worldwide box-office. While Theri was a summer release in 2016 and grossed more than 150 cr worldwide, Mersal was a Diwali release in 2017 and earned more than 250 cr worldwide. Though critics attempted to belittle Atlee saying he lifts content from classic commercial films and repackages stories to suit the current trend, it’s a given that Vijay and Atlee will definitely join hands for their hat-trick film. Now it looks like AGS Entertainment will be producing the next Vijay – Atlee association. It will be a commercial mass entertainer, as expected. It must be noted that Archana Kalpathi of AGS is a self-confessed Vijay fan and she must be feeling all kicked about producing a film with the star now. However, an official announcement is awaited!

Meanwhile, Sarkar will soon be shot in the USA, where a song is planned in and around popular spots of Las Vegas. The complete shooting of Sarkar will be wrapped by the end of August and the film, which is being bankrolled by Sun Pictures, will hit the screens for Diwali as planned earlier.