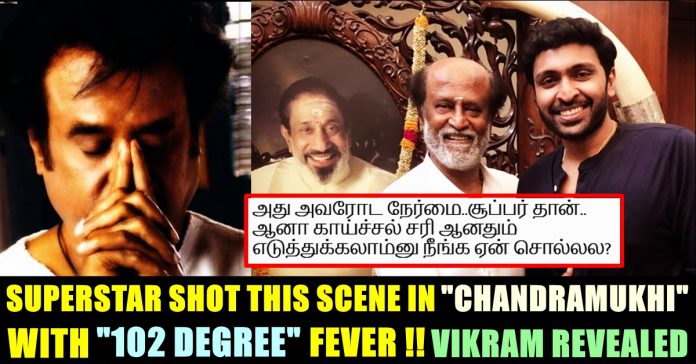 Superstar Rajinikanth sizzled on screen as Pettaivelan aka Kaali in director Karthik Subbaraj’s Petta. The actor is currently shooting for AR Murugadoss’s forthcoming film, Darbar. Touted to be an action flick, the shooting is currently underway in Mumbai.

Recently, a still of AR Murugadoss interacting with Rajinikanth was released on social media and is going viral among netizens. Thalaivar’s ardent fans are going gaga about how stylish Rajinikanth looks and stated that they can’t wait to see him in Darbar.

Meanwhile, his earlier blockbuster Chandramukhi streamed on Television recently. Fans of the actors proudly shared the video by saying that the movie acts as favourite even after all these years. Check out the post here :

As Sivaji Production technically becomes actor Vikram Prabhu’s home production, the actor has revealed an unknown fact while seeing the post in twitter. In his tweet he said “😊Fact: #Superstar shot that entire fight scene with a 102 fever #Thalaivar 🙏”

Though this post made many fans of the Superstar fans happy, few questioned why he had not asked Rajinikanth to take rest when his health was not well. Check out some of their reactions :

wat a dedicated man tatsy he s still in NO1 postiton #superstar ,

thanks brother for the info @iamVikramPrabhu

Omg seriously?? What a hard worker. My thalaivar my great inspiration

Drove over 500 miles from Scotland to London to watch Chandramukhi. Wow what an experience 👏🏼👏🏼👏🏼 #Thalaivar #Rajinikanth

Vikram Prabhu, who shot to fame with his debut film Kumki, has done some decent films over the years. He was last seen in the movie Thuppaki Munai, which received a decent response from the audience.

The actor is currently shooting for the movie Asuraguru and Vanam Kottatum. The former is directed by Mohan Raja’s assistant A Raajdheep and the latter is helmed by Dhana Sekaran.