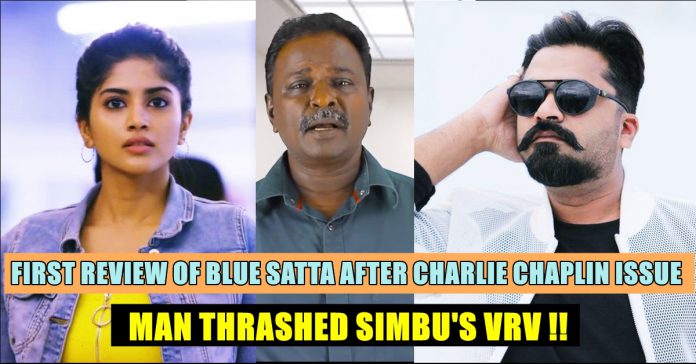 Starring Silambarasan, who is popularly known as Simbu, Vantha Rajavathaan Varuven is helmed by Sundar C was released yesterday.

As soon as the movie released, reviews for the film kept on pouring from Youtube channels and online websites. Blue Satta Maaran, who recently caught into a controversy for reviewing the Tamil film Charlie Chaplin released his review in the wee hours.

“Blue Sattai” Maaran is one of the prominent movie reviewers of Kollywood films. He is very well known for his rural slang, funny phrases, short stories and real life incidents in his movie reviews. For his unique style of movie reviewing, the man who always wears blue shirt has a separate set of fan following and his youtube channel Tamil talkies enjoys more than 8 lakh subscribers.

Check out his review here :

He was accused by the director Shakthi Chidambaram and Amma Creations Siva for demanding money from them to praise the movie in his review. However the reviewer denied it through his twitter account.

Coming back to his review of Vantha Rajavathaan Varuven, Blue Satta says that he expected the film to be a minimum guaranteed one but was disappointed after watching it. “This time not Simbu but director Sundar.C is the one who did not turned up for the shoot it seems” says the reviewer in his video.

In the 6 minutes long video review, Blue satta pointed out the logic loopholes of the movie and says that it is a scene by scene remake. “The only alternative they done from the original is reducing the budget money.” says Blue Satta.