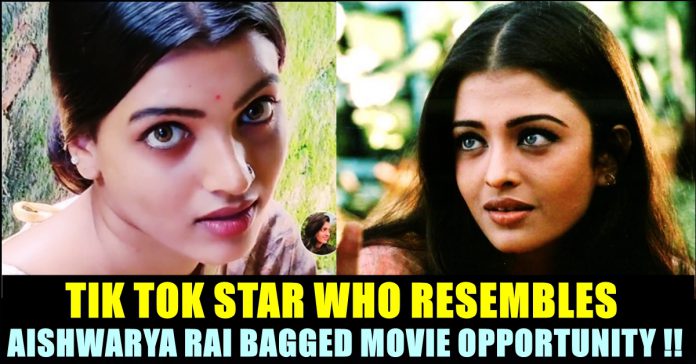 The Tik tok star whose enjoys a huge following in Tik Tok and Instagram, often recreates Aishwarya Rai’s iconic scenes, mostly from her South Indian films to impress her followers. She who currently enjoys more than 1.2 million followers in Tik Tok platforms, has 1,91,000 followers in the photo posting social media platform.

Her recreation of Aishwarya Rai from “Iruvar” movie directed by Mani Rathman and from Rajeev menon’s “Kandukonden Kandukonden”, gained her a huge attention across all the social media platforms. Watch the videos here :

Now, a recent report has suggested that the Tik Tok star has grabbed an opportunity to act in a movie named as “Picasso”. The Malayalam language movie is being produced by Sheik Afsal and directed by Sunil Kariattukara. She also acted in few advertisements and did minor roles in movies. She is also expected to feature in Tamil and Malayalam movies soon for the reach she is getting for her every video.

However, Amrutha is not limiting herself to only Aishwarya Rai recreations but also posting videos of herself mimicking other popular audios and sound tracks. Check out some of the videos she posted in Instagram :

On request🤩🤩aiswarya😍😍huge fan of her too😘😘

Aishwarya Rai who is 46 years old now, was last seen in Rajinikanth’s Enthiran in Tamil. She will be next seen in Mani Ratnam’s upcoming film, Ponniyin Selvan. Since the shooting of the film was halted due to lockdown, it will now reportedly be completed in one long schedule in order to not miss its release date. Comment your views on Amrutha becoming a top heroine like Aishwarya Rai in Indian cinema !!