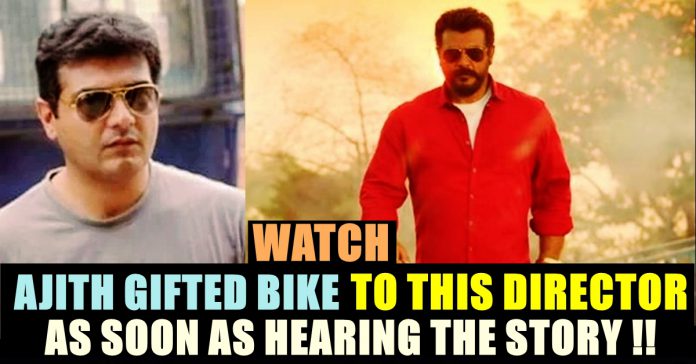 An old video interview about actor Ajith’s interest in professional car race has been released in the official twitter account of Sun TV. In the video, actor directors such as SJ Surya, KS Ravikumar has talked about Ajith and his passion towards the field of driving vehicles.

While talking about Ajith kumar’s interest in vehicles such as car and bike, SJ Surya has revealed that Ajith Kumar gifted him a bike after listening to the story of Vaali. The interview was shot in the year 2003 during when SJ Suriya is about to make his acting debut.

In the video interview SJ Surya said that Ajith’s interest in Car and bikes is something we all know about. “To express our love towards someone, we all tend to gift them a flower bouquet or a pen or a gold chain. But if Ajith likes to gift someone he would choose to gift them car or bike. When I narrated him the story of Vaali, he gifted me a bike. When I screened him the first copy of the film, he gifted me a car. I went on to narrate him a script just to get a chance. But in his subconscious mind, he always thinks of cars and bikes which is evident through the gifts he presented me” said SJ Surya in the interview.

Watch the video below from 2nd minute :

The film SJ Surya was talking about in the video became one of the biggest blockbusters of his acting career in the year 1999. For the first time, The film Vaali starred Ajith in a double role with Simran and Jyothika in the lead roles. Vivek, Sujitha, and Pandu did supporting roles. A modern-day fictional adaptation of the legend of Vali from the Ramayana, it tells the story of Deva and Shiva, two identical twin brothers, with Deva being deaf and dumb. When Shiva marries his sweetheart Priya, Deva becomes obsessed with and lusts for Priya.

Being one of the leading actors of Kollywood, actor Ajithkumar enjoys a huge fan base in Tamilnadu. Despite of getting a humongous amount of love from his fans, Ajith refused to have fan clubs and dismantled it few years ago as he wants his fans to look after their families. This only increased the love of fans for him as they started admiring him more for his attributes.

What do you think on this interview shot in the year 2003 ?? Comment your views below !!