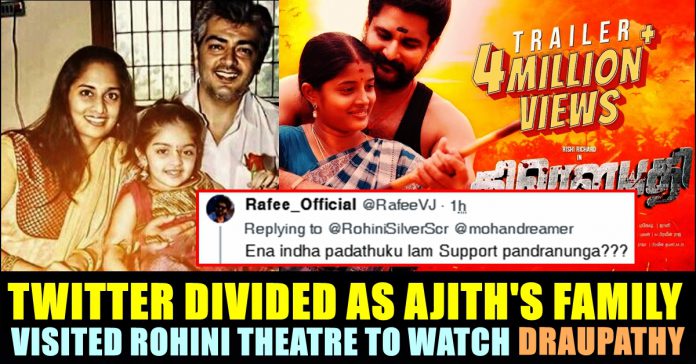 Draupathy film released in theatres on 28th of February and is being reviewed by the Netizens. The film which has actor Richard in the lead role became a subject to controversy since the trailer of it released. The “Pazhaya Vannarapettai” fame Mohan directorial is highly believed to be a cast based low budget film against a particular community is facing severe criticism across the internet.

BJP supporter H.Raja watched the film in a special screening and promoted the film. Actress gayathri Raguram also promoting for the film constantly. Now a recent tweet from the official twitter handle of Rohini silver screen located in Koyambedu shows former actress Shalini watching the movie with her daughter. As well know, Richard is a blood brother of Shalini and the particular picture of her watching film is going viral in social media platforms. Videos of them arriving into the theatre is also doing rounds in Twitter.

“From #Thailavar family to #Thala family the only destination to celebrate a movie as a fan is at #FansFortRohini ShaliniAjith and her daughter enjoying #Draupathi movie at Rohini Silver screens” said the twitter handle of Rohini theatres while sharing the pciture.

As soon as the picture released, the hashtag “Shalini Ajith” started trending in the micro blogging site. Fans of actor Ajith and Vijay started involving in verbal spat regarding the presence of Shalini in Rohini theatre. Many accused actor Ajith and his family for supporting a cast based film and the others defended the act of the former actress by saying that she is just watching the movie for her brother’s sake.

Makers of Draupathi are promoting the film by saying that the film targets the audience of B and C centres. They also highlighting the term “Naadaga Kaadhal” and saying it will expose the people who are luring women to get their money and properties.

Comment your views on these reactions of the fans !!