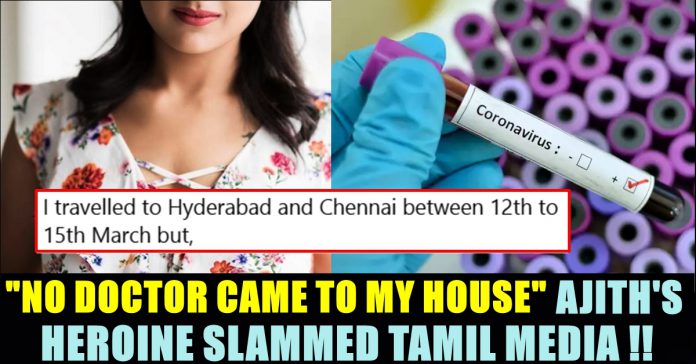 To a media report which said that actress Shraddha Srinath was forced to self isolate herself due to her frequent flight travels, the actress herself clarified through her official twitter account. Though government firmly said that there is no community spread in India in a recent report, the results in past two days freaked people out. State Tamilnadu saw the highest single day spike on 1st of April as 110 new cases got reported.

Now, Shraddha Srinath who is known for appearing in films like Vikram Vedha and Nerkonda Parvai, replied to Dinamalar which said that Karnataka state Doctors visited Shraddha’s house after knowing that she visited in flights which had Corona affected people. Denying to half of the news, Shraddha said that no doctors visited her house to check her. The report further said that she talked about it in her social media account which was also denied by the actress. Accepting the fact that she visited Chennai and Hyderabad between 12th and 15th March, Shraddha said no Corona infected person travelled with her.

The actress says that she self isolated herself due to a suggestion of her cousin doctor. She updated that her 14 days isolation period ended by 29th of March itself. She said that she is currently helping her mother in kitchen through her series of tweets. “I CHOSE to self isolate for 14 days upon the advice of my cousin doctor who told me to do it as a precautionary measure – as every responsible and aware citizen has been and should be doing after international/domestic travels.” she wrote in her tweet.

I CHOSE to self isolate for 14 days upon the advice of my cousin doctor who told me to do it as a precautionary measure – as every responsible and aware citizen has been and should be doing after international/domestic travels.

My 14 day isolation finished on the 29th of March and now I'm busy helping my mom in the kitchen. So I'll talk to you guys later byeeee! Stay safe and don't spread any viruses/misinformation! Both are dangerous. Cheers 😛

Many rumours regarding the Tamil film celebrities getting affected by Coronavirus is being surfaced in Internet widely. Recently a popular youtube channel said that actor Vijay was inspected by authorities. It all started when Bollywood Singer Kanika Kapoor resulted positive for Coronavirus after returning from London.

As soon as Shraddha clarified on the rumour spread by Dinamalar, many people started slamming the daily magazine. The actress who was last seen in NKP as a flawed woman, is about to expected to appear in Vishal’s Chakkra. Comment your views on this clarification provided by the actress !!