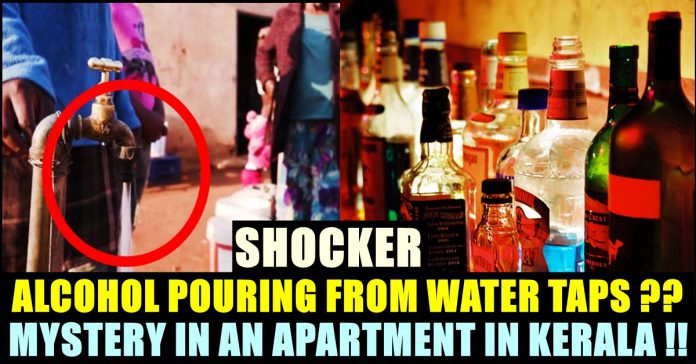 In a way of making the popular comedy scene in the movie “Kalakalappu” where the comedian who is a politician would provide alcohol in his pumpset to gain votes from male voters into reality, an incident took place in the God’s own country. In Thrissur district, residents of Solomon’s Avenue Flat got stunned to see Alcohol flowing from their water taps all of a sudden. In the apartment which is located in Chalakudy, there are 18 families. They came to sense a smell of alcohol in their homes while opening the water taps, in fact a mixture of alcohol and water. The incident happened on Monday morning according to reports.

The residents sensed a smell of alcohol in their building on Sunday evening. The very next morning, they got shocked to realize that their water is smelling and tasting like alcohol. However, the mystery was solved when the residents came to know that it was caused by the officials of excise department. Their effort of destroying the unlawful storing of 6,000 litres of alcohol of “Ranchana” bar went completely wrong as they poured it into a pit next to the apartment.

It all started when “Ranchana” bar charged with unlawful storing of alcohol in their place 6 long years ago. Due to the intervene of The excise personnel, court asked the officers to dispose the liquor in the first place. According to News 18, it took 6 hours for the excise officers to get rid of the alcohol. They did it by digging a pit on the bar premises by emptying one bottle after another.

The officers are indeed unaware of the fact that the well of Solomon Avenue was located nearby and the 6,000 litres of alcohol slowly mixed with the water under the soil. The amount of alcohol has spoiled the 20,000 litres of drinking water regularly used by the 18 families.

After the residents complained about the issue on Sunday, Chalakudy Police and Municipality confirmed the presence of liquid in the drinking water. 5,000 litres of drinking water was supplied in tankers to the apartment by the Municipality in the morning and evening. This situation continued on Tuesday as well. At the same time, the excise department was involved in draining out the alcoholic water from the well and in cleaning it. The bar owner has accepted to bear the expenses for the water provided to the residents for two days, according to The News Minute.

What do you think on this strange turn of events that took place in Kerala ?? Comment your views below !!