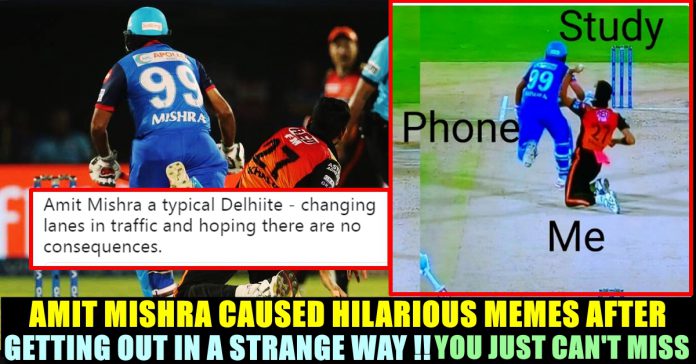 The Indian Premier League 2019 Eliminator between Delhi Capitals and Sunrisers Hyderabad turned into a nail-biting, drama-filled contest in Visakhapatnam during the final over as Amit Mishra was given out for obstructing the field.

Amit Mishra became the talk of social media after becoming a victim of one of the rarest forms of dismissals. With Delhi, who have had an exceptional season, requiring just two runs to win off the final three balls, Mishra brought the equation down to two off two balls. On the fourth delivery of Khaleel Ahmed’s over, Mishra went for the big one which he missed. Then, he took off for a single and wicketkeeper Wriddhiman Saha aimed at the stumps. He missed it as well. Khaleel then collected the ball and took an aim at the non-striker’s end. Mishra changed his track while running and the throw hit him on the arm, in front of the stumps.

Initially given not out by field umpire S Ravi, the decision went upstairs and Mishra was adjudged out for obstructing the field. This grabbed the attention of social media users who had a good laugh by creating memes.

Check out some of the other reactions here :

Amit Mishra a typical Delhiite – changing lanes in traffic and hoping there are no consequences. pic.twitter.com/JcIYaPcDWT

#AmitMishra bringing in all his experience in that crucial run 😉

Time to plug the funniest run-out in history of IPL 😂😂😂

Amit Mishra: India’s Best Batsmen.
No bowler, no fielder, no keeper could get him out.

It required the entire field. pic.twitter.com/VyiOFCm7Ka

What do you think on this weird dismissal and the hilarious memes on it ?? Comment your views below !!