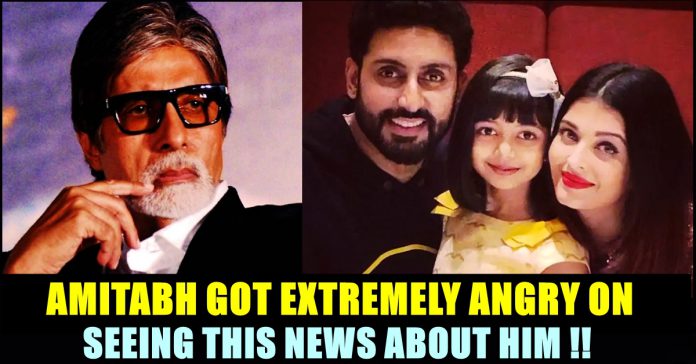 Amitabh Bachchan who is currently getting treatment for the COVID 19 virus, got upset on seeing a report about him in the micro blogging social media site. Earlier this month, along with the Bollywood Superstar, his son Abhishek Bachchan, his daughter-in-law and grand daughter Aradhya tested positive for the COVID 19 virus. The father and son duo had got themselves admitted to Nanavati hospital in Mumbai on 11th of July after testing positive for the virus.

Initially Aishwarya Rai remained under home quarantine but was taken to hospital after developing symptoms. Now the Big B has came up with a tweet denying a report regarding his health state. Despite of getting treatment, the 77 year old actor is very much active in social media platforms through his official Twitter account.

A leading news channel published a news saying that the Bollywood Superstar had tested negative and got cured completely. Ashok Pandit, a filmmaker confirmed the news and said that the recovery was made only due to the prayers of million people.

All fans of @SrBachchan have prayed for his fast recovery. We were all sure that he will get well soon: @ashokepandit, Filmmaker tells TIMES NOW. pic.twitter.com/g8zfvWOHCK

“Reacting to the tweet, Amitabh who looked visibly angry, wore ” .. this news is incorrect , irresponsible , fake and an incorrigible LIE !!” he wrote

.. this news is incorrect , irresponsible , fake and an incorrigible LIE !! https://t.co/uI2xIjMsUU

Followed by this clarification from the actor himself, Timesnow media came up with an apology.

However, many followers of the Superstar actor, blamed the media channel for their inappropriate news. “You should be ashamed of yourself if u call yourselves journalists ! Amitabh Bachchan has confirmed this NEWS as a fake!” wrote one of a twitter user whereas another said “RIP journalism”. Check out some of their reactions below :

Sir you please daily tweet what time you or what you eat, how much water you drink, how you feel, what the doctors say.. so that the media can concentrate on other stuff rather than speculating and reporting this. 🙈

You should be ashamed of yourself if u call yourselves journalists !
Amitabh Bachchan has confirmed this NEWS as a fake!

Amitabh who is yet to make his Tamil onscreen debut, is a Superstar of North Indian film industry. His recent films Badla, Pink became massive blockbusters. On 11th of July Amitabh voluntarily posted a tweet and updated about his COVID 19 infection, unlike other people who are trying to hide their symptoms to avoid visiting hospitals. Amitabh creating an awareness among the people of our country to stay strong by posting the tweets and updates about his health.

Comment your views on the news published by the channel and Amitabh’s reaction to it !!