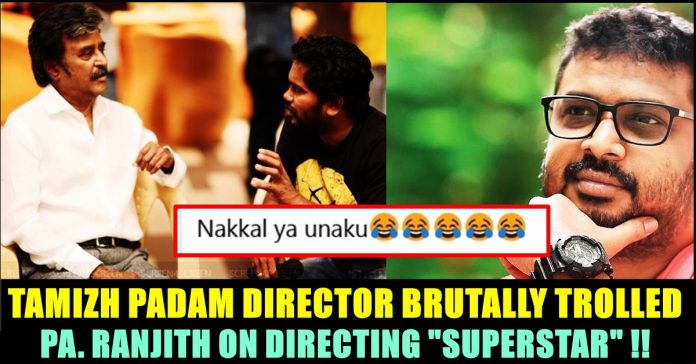 Not only in his films, the filmmaker also known for his wittiness in his tweets. Now recently, Amudhan posted a selfie picture along with director Pa. Ranjith in his official twitter account. As we all know Ranjith is only filmmaker to get a chance to direct Superstar Rajinikanth is two back back films with an experience of just two films in the past. Both Kabali and Kaala of the duo was critically acclaimed and made the fans happy as well.

In the post, Amudhan who seems to have a strong friendship with Ranjith, wrote an extremely humorous caption related to his two spoof movies. He wrote “The man who directed Superstar twice & Pa Ranjith. ” Amithan wrote in the caption. Check out his post below :

In his both the film, actor Shiva who played the protagonist role would appear with a tagline saying “Agila Ulaga Superstar”. As it is a spoof movie, Amudhan would have used it in a way of trolling the other tags used by few of the top actors. Mentioning the tagline which Shiva appeared with, Amudhan posted this tweet which received hilarious responses. Check out some of their comments below :

This is beyond Savage 🤣🤣🤣 https://t.co/XMIromJOgZ

Amudhan returned to filmmaking after eight years with the sequel to his debut film Tamizh Padam. It isn’t by design though, given he made another film in between, Rendaavadhu Padam, which looks to have been shelved. Admittedly, he didn’t want to follow up Tamizh Padam with another spoof, but the passage of time in between, he says, got him excited again about working on one.