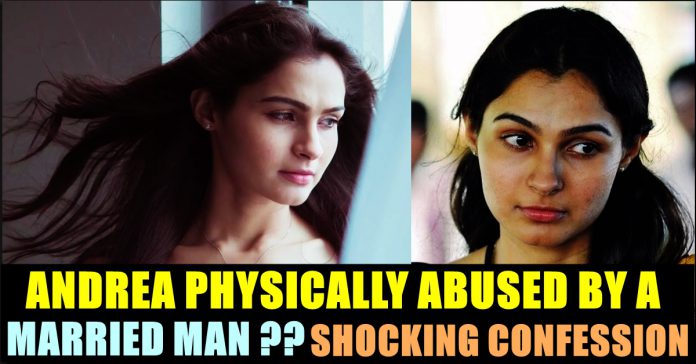 Singer and actor Andrea Jeremiah who got an opportunity in Gautham Menon’s “Pachchaikili Muthucharam” to introduce herself, has acted in many films in Tamil industry. She is known for her appearance in movies such as Vishwaroopam, Aayirathil Oruvan, Aval sung a number songs for various leading music directors as well.

She was last seen in Vettri Maran’s Vada Chennai in which she played the role of Chandra. The entire movie plot revolves around the emotions of Chandra and the actress impressed the critics and audience with her performance. However, she is not active in the film industry since then. The reason behind it  which was unknown till yesterday, now revealed as the actress herself confessed  it during an event.

In this recent interaction, she revealed that she was diagnosed with acute depression and had to recover before getting back to work.

Andrea grabbed the headlines after revealing the reason behind her health condition.  Recently, the actress was in Bengaluru to release her collection of poems, Broken Wing. According to a report published in Indiaglitz, the actress revealed that she was in a relationship with a married man.

After reading her poems to a group of people in Bengaluru, many pointed out that her writing is melancholic and asked the reason behind her pain. Andrea said that her then partner had abused her physically and mentally. She was diagnosed with acute depression.

Hello all ! Post the #bpf2019 , a lot of ppl have been asking where they can get their copy of #brokenwing .. so we’ve created an instapage @andreajeremiah.brokenwing 😌 all you have to do is DM with your details to get your autographed copy 🥰 P.S : This book of poems is a handcrafted labor of love. It took a lot of courage for me to share something so personal with the world, so please treat my offering with the respect that it deserves 🙏🏻 Once again, many thanks to my best friend @rinixmukkath for making this happen & my dearest cousin @sheenajeremiah for the stunning illustrations 💜💜💜

To recover from it, she involved herself in an Ayurveda detox program and took a break from her profession. She also took to Instagram to share the cover of Broken Wing and said that it took a lot of courage to share something personal through her poems.

Andrea Jeremiah was in an intimate relationship with music director Anirudh few years back and the personal pictures of them created huge uproar among the audience of Tamil cinema. However, the actress who seems to be recovered from her health issue posted a picture of her to indicate that she is back to work.

Check out the post of the actress getting prepared to perform on A.R Rahman’s concert which is going to take place in Chennai on August 10 :