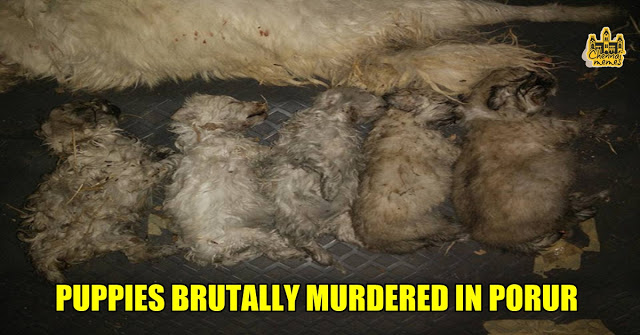 Animal welfare activists in the city are offering areward to anyone who can give them information about two dogs and five puppies found dead near Porur lake on Friday evening. While the cause of death is yet to be determined, activists suspect the animals were poisoned.
“My friend Beena Mathan Mohan was on her way to my home when she saw two dead dogs near the lake,” said animal welfare activist Kamal Banger. “When we went there to bury the dogs, we found that there were two adult – male and female – Pomeranians as well as five puppies less than a month old, all dead.”

The carcasses were taken to Heart2Heart Veterinary Hospital in Santhome and later sent to the government veterinary hospital for post-mortem.

An FIR has also been filed with the Porur SRMC police station. “The bodies of the dogs were bluish and blood was oozing out of their mouths, so we suspect it is a case of poisoning,” says another activist Dinesh Baba, adding that both the adult dogs had collars and were on leashes.

The 28-year-old Baba has started a social media campaign to help identify the owners of the dogs. “I am offering Rs 10,000 to anyone who will give any information about the dogs that will help us track the owners or the person who killed them,” he says.