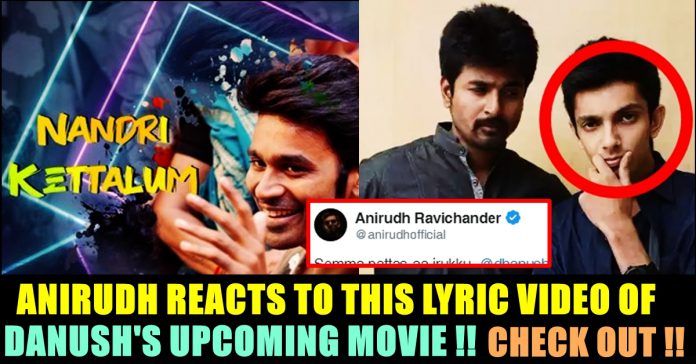 Actor Dhanush who is basking in the success of “Asuran” and “Enai Nokki Paayum Thotta”, is all set for his next film which looks like a commercial entertainer. Titled as “Pattas”, the film’s first single “Chill Bro” released in Youtube yesterday only to go viral. The film which is directed by “Kodi” filmmaker Durai Senthil Kumar, has Danush in a young charming look which resembles his look in earlier days of his career.

The lyrics of the song “Chill Bro” contains essence which would attract the children and youngsters as one of the line goes “Winner Winner Chicken Dinner”. The line gives a major reference to the popular game of today’s generation “PUB-G”.

Within a day, the song reached 1 million views which shows the fame and fan base of the “Vada chennai” actor. With music and lyrics by Vivek-Mervin, the film marks the first collaboration of this composer duo with Dhanush, who has also sung the song. The film is made under the Sathyajyothi Films banner, which bankrolled the blockbuster Viswasam this year.

As soon as the single released, many fans and followers of the actor wished the actor and expressed their happiness. Meanwhile music composer Anirudh also reacted to the song in a positive way which surprised the fans of the DNA.

Anirudh was introduced by Danush in Tamil film industry through the film “3” which was directed by Aishwarya Danush. Through that film Anirudh became a young sensation as the song “Why This Kolaveri Di” went viral worldwide. After that, the duo worked on several hit projects and unexpectedly stopped working together since 2015 film Thangamagan due to some personal issues. Even for the sequel of VIP and for his debut directorial Power Paandi, Danush made Sean rolden to compose music which shocked the fans of DNA combo.

This made many fans of duo happy. However few fans who couldn’t forget the rift between Danush and Anirudh, trolled the music composer and said that the lyric written in the song are meant for him. Check out some of the reactions below :

On the work front, Anirudh is busy in composing music for Rajinikanth’s Darbar, Kamal Haasan’s Indian 2, Vijay’s Thalapathy 64 etc. It is also notable that the composer done music for Ajithkumar in Vivegam movie. Let us hope for the successful duo to reunite again. What do you think on the tweet of Anirudh and the reactions he is receiving for it. Comment your views below !!