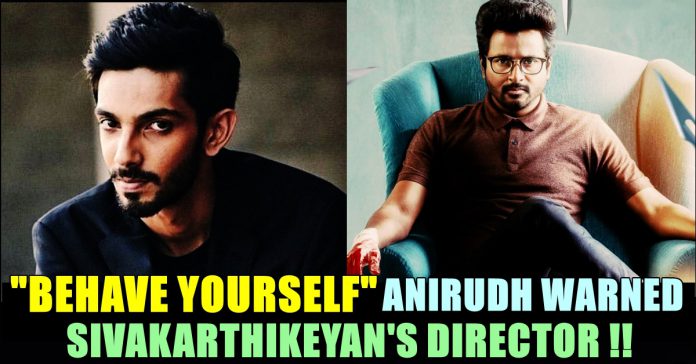 Tamil music composer Anirudh Ravichander who is spending his quarantine period in his music studio, yesterday uploaded series videos of himself playing the Background music of his own films in his piano. He composed the BGMs of his debut movie “Moonu”, “Naanum Rowdy Dhaan” and “Jersey” from Telugu film industry. He added the videos with a caption saying “The piano n I.. jus the two of us..”

The piano n I.. jus the two of us.. #NeeyumNaanum

These glimpses Anirudh’s live performance impressed many of his followers including his colleagues who are working in the music department of Tamil film industry. Check out some of their reactions below :

Meanwhile. Director Nelson Dilipkumar, a dear friend of the filmmaker and also the one who directed Nayanthara in “Kolamaavu Kokilaa” posted a cheeky comment, mocking the caption of the music composer. He said that he thinks that one more person is present there in his studio or may be in his heart with funny emojis. Nelson almost revealed about the romantic relationship of the 29 year old music composer which made him to reply immediately.

“I think one more person is also there 🧐 (may be inside ur manasu)” he wrote in his comment to which Anirudh replied by asking him to behave himself. “Nelsaaaa behave yourself 😬” read Anirudh’s reply, screenshot of which is doing rounds in the social media platforms.

After his successful venture “Kolamaavu Kokila”, Nelson is currently directing Sivakarthikeyan in his upcoming film “Doctor” which is being produced by KJR Studios. Anirudh who composed music for his debut film is going to compose music for his second film as well.

Very happy to share that my next film will be with my dearmost friends @Nelson_director & @anirudhofficial titled as #DOCTOR 👨‍⚕😊👍 Once again happy to be associated with @kjr_studios 👍 Shoot starts soon🙏 @SKProdOffl pic.twitter.com/W82ltJrbHK

Anirudh became one of the sought after music composer of Kollywood in no time. Recently his work for Superstar Rajinikanth in Darbar was released and is being celebrated by Tamil cinema fans across the world. It is notable that he is currently working for Ulaganaayagan Kamal Haasan and for Thalapathy in Indian 2 and Thalapathy 64 respectively. It is notable that the musician already worked for Ajithkumar in Vethalam and Vivegam.

Anirudh was introduced by Danush in Tamil film industry through the film “3” which was directed by Aishwarya Danush. Through that film Anirudh became a young sensation as the song “Why This Kolaveri Di” went viral worldwide. After that, the duo worked on several hit projects and unexpectedly stopped working together since 2015 film Thangamagan due to some personal issues. Even for the sequel of VIP and for his debut directorial Power Paandi, Danush made Sean rolden to compose music which shocked the fans of DNA combo.