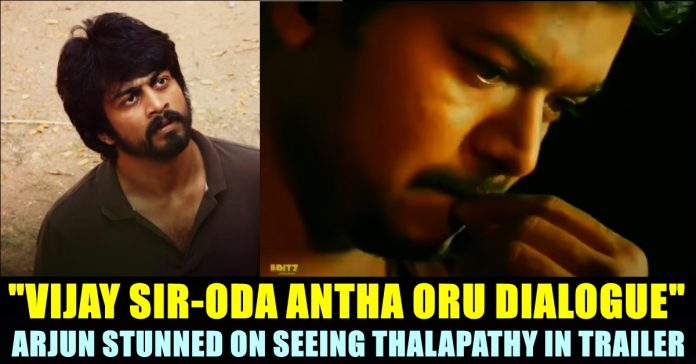 In a live interaction with his followers in Instagram, actor Arjun Das provided few updates about the trailer of his most awaited upcoming film of 2020 “Master”. The film which was supposed to release on 9th of April month got postponed without further notice due to the threat being created by Coronavirus across the world. Lately, makers of the film released a poster and said “Lockdown shouldn’t knockdown our spirits! Master will meet you soon” to the fans who asked them to release trailer at least.

We miss you, just like how you miss us!

Hoping that a master-mind finds an antidote and put an end to Corona!

Audio launch of the film took place just before the lockdown announcement and it escalated the expectation level for the film. So far three looks of the film has been released and the lyric videos of Kutti Story, Vaathi Coming, Antha Kanna Paathakka is trending in youtube. After more than 50 days of lockdown, as the government announced few relaxation for many fields, post production of “Master” resumed which was updated by the director himself.

“I have watched the trailer almost six times. The trailer looks deadly but I think it will release only after the release date is confirmed. I can assure you one things. No matter how long it will take for the trailer to release, it will be worth the wait. Just wait for few more times and I am sure the producer will release the trailer in the right time” said Arjun who went on to talk about a particular dialogue delivered by “Thalapathy” Vijay in the trailer.

“There is a shot in that trailer. That one dialogue (going to be delivered) by Vijay Sir. I have a strong feeling that people are going to go crazy about it. I can’t wait for all of you to watch the trailer.” said Arjun who also cleared the air on “Master” getting released in OTT platforms.

Arjun Das who debuted to tamil film industry through Lokesh Kanagaraj’s “Kaithi”, replaced actor Aju Varghese who opted out of the project after few days of the official announcement. He is yet to appear in “Antha Kaaram” and attracted the audience with his unique voice. “Master” film’s ensemble cast crew includes Vijay Sethupathi, Malavika Mohanan, Shanthanu, Gowri Kishan and many others.