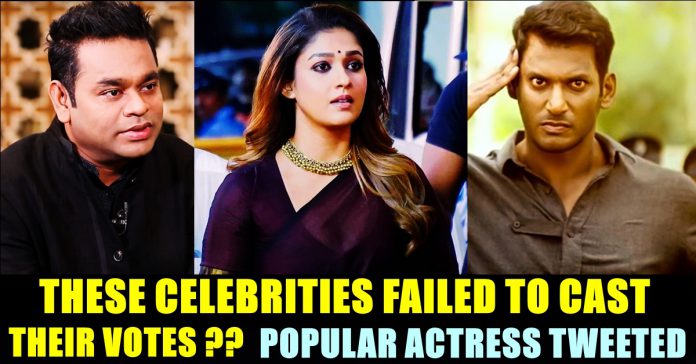 Actress Kasthuri who condemned political parties for distributing money after updating about her inability in voting for the Tamil nadu assembly election 2021, came up with a tweet listing out the names of some of the celebrities alleging that they didn’t cast their votes. Her list included the names of actors Vishal, Nayanthara, Director Vetri Maaran, Music composer A.R Rahman and Super star rajinikanth’s daughter Soundarya.

Among the minor scuffles among cadres and glitches in the electronic voting machines in some parts of the state, what disappointed people the most is the lowest number of people casting their vote from the capital of the state. It is reported that only 59.4 % people from Chennai city made their presence in the polling stations to cast their vote on the day which was declared as a public holiday.

Tamil actress Kasthuri who is pretty much active in social media platforms, is known for providing her political opinions and views through her tweets. On Sunday, she came up with a tweet saying that won’t be casting her vote for the upcoming Tamil nadu assembly election that is scheduled to take place on Tuesday due to an “unavoidable problem”. She also took a dig at parties which gave money to people and sarcastically said that she feels left out. However, many of her social media followers slammed her for failing to her “national duty” of casting her vote.

This year they have paid all income groups! #ShameonUs #dravidianLegacy

Almost all the celebrities of Tamil cinema industry including Vijay, Ajith, Rajinikanth and Kamal Haasan made their presence in the polling stations to cast their votes. Now, Kasthuri, came up with a tweet listing out the names of a number of celebrities and alleged that they didn’t vote.

“No pictures of Dhanush, simbu, jeyam ravi, nayan-shivan from yesterday? Or for that matter no directors either?” Kasthuri wrote in her first tweet and got corrected by her followers. In her next tweet, she said that Vishal, Nayanthara, Vetri Maaran, AR Rahman, Soudarya Vishakan didn’t vote by writing “Update : Thanks for all the info guys! Looks like most actors and sports persons voted. Did Vishal not vote? Whoa. Soundarya vishakan, nayan, vetrimaran, ARR among those who didn’t vote!”

Update : Thanks for all the info guys!
Looks like most actors and sports persons voted. 👍
Did Vishal not vote? Whoa. Soundarya vishakan, nayan, vetrimaran, ARR among those who didn't vote!