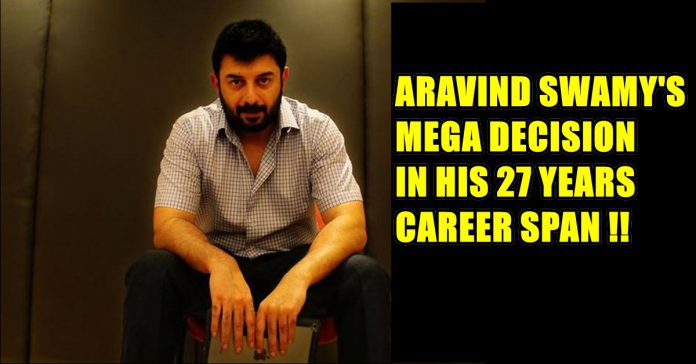 Arvind Swamy is an Indian film actor, model, entrepreneur and television presenter known for his work in Tamil Cinema. He was introduced as an actor by Mani Rathnam with the film Thalapathi (1991) and subsequently starred in successful films such as  Roja (1992), Bombay (1995), Minsaara Kanavu (1997) and Alaipayuthe (2000) in earlier of his career. We have seen him as the handsome hunbk who stole millions of hearts with his subtle performance in so many of his films. His variation till date is phenomenal and we are waiting to witness him in his upcoming films as well. Now the veteran actor seems to take a very important decision of his life which is going to be vastly welcomed by the audience. Yes! Arvind swamy planned to wield the megaphone for a feature flick and guess what, he has already gathered the technical team and locked the script as well. It is expected that he will be making the big leap in his career towards the end of his career. However we have to wait for the official confirmation on this. Arvind Swamy is currently working as an actor in Manirathnam’s Chekka Chivantha Vanam, Naragasooran and Sathuranga Vettai where his Baskar oru Rascal successfully running in theatres. We wish him to become an excellent filmmaker !!

What do you think on his decision !!