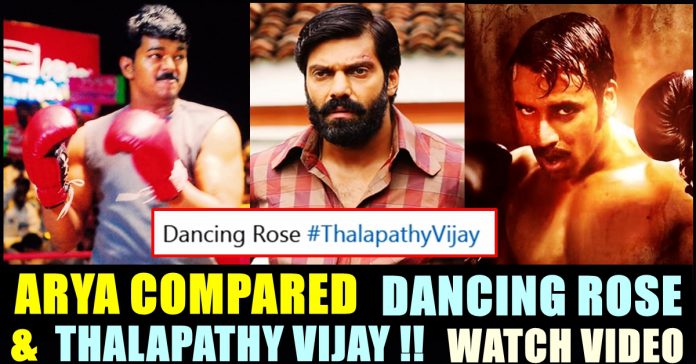 Arya endorsed a tweet of a fan who compared actor Vijay’s dancing skills with the dialogues uttered for “Dancing Rose” in the film “Sarpatta Parambarai”. The video meme showed that the dancing skills couldn’t be competed even by the one who can compete with universal star dancer Michael Jackson. Sharing the tweet in his twitter timeline, actor Arya who played lead in the period sports drama, added fire and dance emojis.

Ever since “Sarpatta Paramabarai” released on Amazon Prime, every second post that takes place in the feeds of Tamil social media platforms are talking about nothing but “Dancing Rose”, one of the many meaningful characters of the Pa. Ranjith directorial. The character was done by Shabeer Karakkal, a multifaceted emerging actor and the viewers are keen to know about who he is and what he is known for prior acting in “Sarpatta Parambarai”. The actor is being interviewed by several prominent Tamil youtube channels after he gave life to the fictional character “Dancing Rose” which was inspired from Naseem Hamed, a former professional boxer.

A dialogue uttered by Pasupathi who played “Rangan Vathiyar” in the film about “Dancing” Rose became popular among the netizens. Rangan Vathiyar, to teach his student Kabilan about the style and strategies of Dancing Rose whom he is going to face in the ring, would say “You could even hold the capability to beat “Vembuli” (current boxing champion) but that is not the qualification to beat “Dancing” Rose”

The dialogue has become a widely used meme template among the netizens. Many video memes emerged containing the dialogue in the background as well. A twitter user made a meme video applying actor Vijay as “Dancing” rose and said that even the one who could compete with Michael Jackson couldn’t beat the actor’s dancing skills.

Watch the meme below :

The tweet garnered wide reach among the fans of actor Vijay and others. Arya himself happened to see the video meme and actor decided to endorse the tweet. The actor shared the video in his twitter timeline and his tweet received 13k favourites in no time. Check out his tweet below :

Vijay is one of the finest actors of Kollywood and the steps he executes in the introduction songs of his films speaks volumes. The tweet of Arya made fans of the actor extremely happy which is evident through the comments they are dropping. Check out some of their comments below :

On the work front, Vijay is all set to appear in “Beast” post lockdown whereas Arya’s “Aranmanai 3” and “Enemey” are awaiting for the release. Comment your views on this video edit of Vijay as “Dancing Rose” and Arya’s reaction to it !!