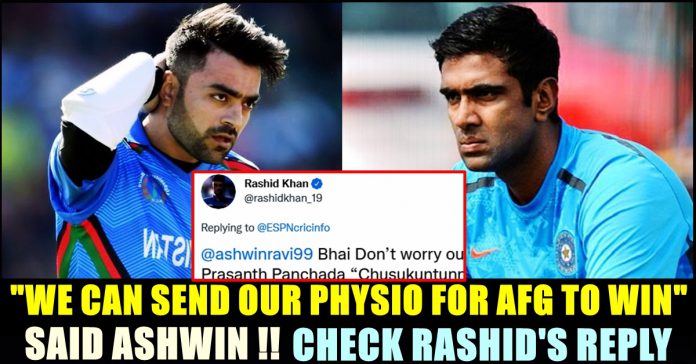 India’s journey in the ongoing T20 world cup tournament fully depends on the performance Afghanistan is going to display on 7th of November against New zealand. Indian off spinner Ravichandran Ashwin came up with a statement expressing his desperation over Afghanistan’s victory. He offered physiotherapist for the team to get Mujeeb back in the team. To everyone’s surprise, Rashid Khan came up with a tweet replying that their physio Prasanth Panchada is doing “well”.

Team India increased their run rate and jumped to spot three through their performance against scot land. When India needed to win the match within 7.1 overs to maintain a decent run rate in the tournament to stay alive, openers KL Rahul and Rohit Sharma helped the team to finish it on the 7th over itself. In 6.3 overs, team India chased down the 85 runs scored by Scotland and moved to the 3rd spot in the table after Pakistan and New zealand. Rahul scored an eighteen ball 50 and Sharma scored 30 runs with 2000 strike rate. Suriya kumar Yadav completed the rituals by smashing a sixer.

Now, the team fully depends on Afghanistan’s victory against New Zealand. “It’s a funny game, and Afghanistan have played good cricket. A lot of our hopes rest with them as well. All the very best to them. I really wish if we can provide any physio support to Mujeeb we can get him onto the field, and that is all we can hope for” Ravi Ashwin said.

This statement of Ashwin grabbed the attention of Afghanistan’s star spinner Rashid Khan who came up with a tweet reply. Rashid said “Bhai Don’t worry our team Physio Prasanth Panchada “Chusukuntunnaru”” which means that their physio is being taken care of.

Here’s how Ashwin replied back :

Check out some of the reaction for the duo’s conversation :

Good to see you learning Telugu. You'll be the first retention for SRH and will probably play here till the end of your career 😂