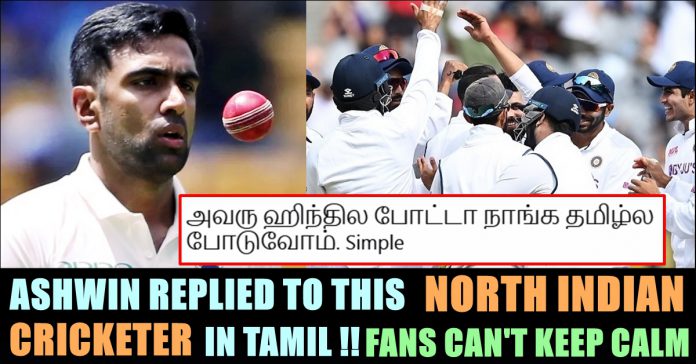 Tamil nadu based Indian cricketer Ravichandran Ashwin picked five wickets in the two innings and helped team India with Rahane, Jadeja, Siraj and Gill to clinch the victory against team Australia in the second test that took place in the Melbourne cricket ground. Ash maintained his grip over Australia’s former captain and top batsman Steve Smith. He dismissed him for the second time in this series and saved India from his destructive batting.

After winning the game, in a way of celebrating the victory, Ashwin came up with a tweet writing “When your backs are up against the wall, lean back and enjoy the support of the wall!! Well done to the entire team and what a win that was” with a picture of himself posing with Jadeja, Umesh Yadav, Chateshwar Pujara, Ajinkya Rahane, Ravichandran Ashwin and Jaspirit Bumrah.

When your backs are up against the wall, lean back and enjoy the support of the wall!! Well done to the entire team and what a win that was💯🔥🔥🔥🥳🥳.
Special mention to Mohd Siraj and @RealShubmanGill 👏👏..@ajinkyarahane88 @cheteshwar1 @Jaspritbumrah93 @y_umesh @imjadeja pic.twitter.com/4t8IlxZFlW

Shami tagged Bumrah, Ashwin, Umesh, Jadeja, Rahane and appreciated them by writing a caption in Hindi. Replying to him, Ash posted a tweet in Tamil. “Thanks da thambi!! Nee illanu oru chinna varutham!! Take care !!” he said in his reply tweet which is roughly translated as “Thanks brother . . It worries a bit that you couldn’t play the match”

On seeing this reply from Ashwin, many followers of him wondered whether Shami speaks Tamil. Many of them believed that Ashwin is expressing his stand against Hindi imposition by replying to Shami’s Hindi tweet in Tamil. Few also wondered how come Ash calling Shami as “Thambi” as the latter looks older than the former.

He’s forcing Hindi so glad that you are forcing tamil

He said in Hindi n he replied in tamil .. Kanaku sariyapochi 😂😂😂

“I speak Tamil with Shami and seriously it’s worked every single time. Somehow, I think our communication has worked. Language is not a barrier for us, I feel, on a very lighter note” said Ashwin in that interaction. The off spinner believed that Shami is taking wickets whenever he speaks to him in Tamil. “Even in Kings 11 Punjab, Whenever there was pressure and I spoke to him in Hindi, he actually gave runs. I realized that me speaking in Tamil actually took the pressure off him” Ash said. Dinesh Karthik who accompanied Ashwin in that chat show, also confirmed the same and said that the duo communicates in Tamil even during test matches.

Watch the interaction below :