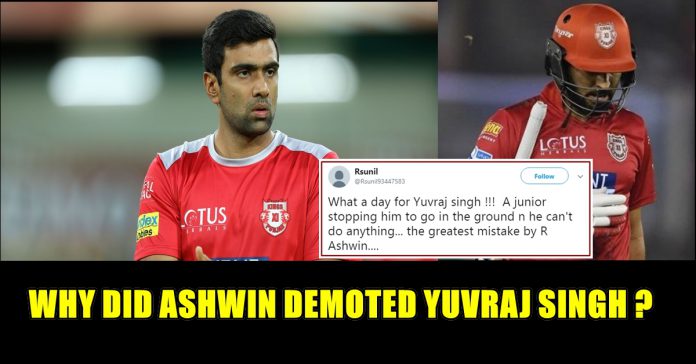 The Mumbai Indians went on to register a fantastic victory in a thriller at Wankhede. The game had a lot of twists and turns but the hosts managed to have the last laugh. With this win, their hopes of making it to the playoffs are still alive as they look forward to beating Delhi Daredevils in their last encounter. Kings XI Punjab began the run chase well. Chris Gayle was dismissed after launching a few out of the ground. However, it was KL Rahul’s knock of 94 runs from just 60 balls which kept the Mumbai bowlers on check throughout the innings. Finch also played a key role at No.3.

As Marcus Stoinis was dismissed early, there was a surprising decision from the dugout. Axar Patel walked in to bat ahead of players like Manoj Tiwary and Yuvraj Singh. It could’ve been a tactical ploy by Kings X1 Punjab  but it ended up being a huge failure for them.

There were also a lot of questions raised over Yuvraj Singh batting down the order. The fact that the team management sent Axar Patel ahead of Yuvraj shows the loss of faith in the senior. The 36-year-old has been going through a lean patch in this year’s Indian Premier League. Unlike the last few years, Yuvraj’s fading popularity amongst the franchisees was evident during the IPL auction. Kings XI Punjab attained him for ₹2 crores in what was the only bid for the left-handed batsman. However, he failed to do any justice with the bat so far in the tournament.

Yuvraj Singh has scored just 65 runs in 8 games he has played this season. While he has never been great when it comes to the IPL, there was certainly a lot better expected from his side. His constant failures have hurt Kings XI Punjab’s prospects badly at the middle order. Earlier in the tournament Ashwin arrogantly answered press reporter while the reporter asked him about Yuvi’s drop. Watch Video here

Here are some of the Twitter reactions on Yuvraj Singh being demoted in the batting order for Axar Patel :

What a day for Yuvraj singh !!! A junior stopping him to go in the ground n he can’t do anything… the greatest mistake by R Ashwin….

#MIvKXIP New news is rounding up from @lionsdenkxip that from next match Ankit Rajpoot and Mohit Sharma will play after Gayle and K L Rahul. Andrew Tye/Aksar will play at number 5. Manoj Tiwari and Yuvraj Singh will play at 10 and 11th position respt.

Ashwin and KXIP Management has made Yuvraj Singh villain for not winning this game. #MIvKXIP #KXIP

When Yuvraj Singh was playing for #RCB, Kohli used to back him despite all odds. Now see how #KXIP and Ashwin treats him. Never gave him the time to find his rhythm like how Dhoni gave Jaddu. Worst and arrogant captaincy. #MIvKXIP pic.twitter.com/9FnNQkyzyk

When Punjab Is At Good Position Then Axar Patel Come In Place Of Yuvraj Singh,And When #KXIP Needs 17 Run At last over Yuvi Comes At Bat,The Man Who Not play Last 5 Matches,So the People Blaming Yuvi for the loss,Think Also Is Axar Patel Is Good Than #YuvrajSingh #MIvKXIP

Yuvraj Singh is a genuine match winner but how will he perform when you’re sending Axar Patel ahead of him. Such a shame, he gave so much to the Indian cricket. There is no point trolling him, Ashwin proved himself as a poor captain today. #MIvKXIP @YUVSTRONG12

@lionsdenkxip it doesn’t make sense not sending Yuvraj Singh u will pay for this by losing this match congrats in advance ….