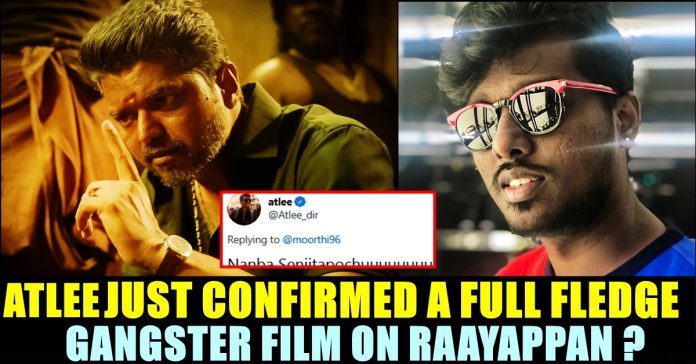 Atlee is arguably one of the most loved and hated filmmaker of Tamil cinema right now. Being a former assistant of Shankar, Atlee’s way of presenting his films and the castings he choose for the characters are considered as his major qualities. All the four films of Atlee became blockbusters despite of the plagiarism controversies. His recent release “BIGIL” has reportedly collected 300 crores in the box office. The film marked the third collaboration of the duo, after “Theri” and “Mersal”.

The film which has actor Vijay in three different dimensions such as a Football player, a local gangster and as a coach for a state football team, was made in a budget of 180 crores. “Bigil” revolves around a youngster who is an aspiring football player, diverts himself from his dream to take revenge of the murderers who killed his father. He then forms a women football team to achieve his father’s dream of providing an identity to his slum through excelling in football game.

Now a fan who seems to be an ardent fan of actor Vijay, posted a meme requesting director Atlee to make a film by having “Raayappan” character alone. “A full fledged gangster movie on Rayappan would easily become one of the best gangster movie ever made in tamil cinema” read the meme he created. Check out his post here :

This tweet grabbed the attention of director Atlee who immediately replied with the first dialogue of Rayappan in the movie “Bigil”. He wrote “Nanba Senjitapochuuuuuuuuuuuuuuuuuu” in his reply which indicated that his next film would most probably the one requested by the fan. Here’s the tweet of Atlee :

Audience saw actor Vijay in three different get ups in Atlee’s Bigil. One of a character was named as “Rayappan”. The role which had actor Vijay in his late 50’s for the first time, attracted the audience in big time. Vijay played the character with so much effort as it required special abilities.

“Rayappan”, being a stutter, acted as the head of his slum and aspired his son to become a national level football player to change the identity of his slum. Unfortunately, he gets stabbed by his enemies which makes his son as a gangster. Fan who loved “Rayappan”, started requiring director Atlee to make another film with Vijay.

Earlier, during the release of the film, Atlee replied same to fans who requested a prequel on Rayappan.

What do you think on the director making another film with Vijay ?? Comment your views below !!