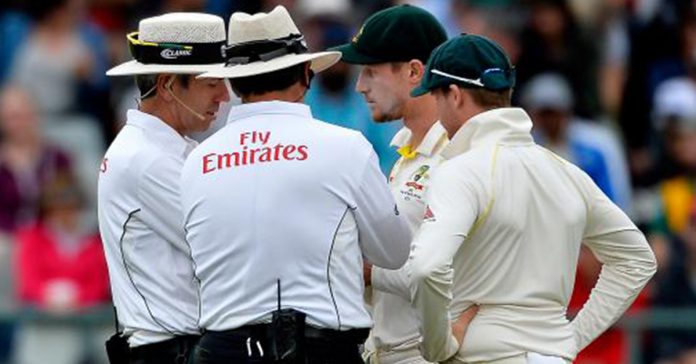 Australia captain Steve Smith has admitted that his side deliberately tampered with the ball during the third Test against South Africa after batsman Cameron Bancroft was seen taking out an object from his pocket while shining the ball.

The incident, which has tarnished Australia’s reputation on the international stage, took place during South Africa’s second innings and the International Cricket Council [ICC] has already charged Bancroft, with Smith admitting that it was a decision taken by the “leadership group” within the team.

The 25-year-old said after play he had been charged with attempting to change the condition of the ball.

Smith said it was a “big mistake” but added he would not stand down. He said the team’s “leadership group” had spoken about it and “thought it was a way to get an advantage”.

South Africa ended the third day in Cape Town on 238-5 in their second innings, a lead of 294 runs

Speaking at a news conference after the day’s play, both Bancroft and Smith apologised.

“I will deal with the damage that comes to my reputation as a consequence,” Bancroft said. “I don’t think I was coerced. I was nervous about it because there are hundreds of cameras around.

“Unfortunately I was in the wrong place at the wrong time. But I am accountable for my actions as well. I’m not proud of what has happened.

“I saw an opportunity to potentially use some tape and get some granules from the rough patches on the wicket and I guess try tried to change the ball condition.

“It didn’t work. The umpires didn’t change the ball. Once I was sighted on the screen having done that I panicked quite a lot and that obviously resulted in me shoving (the tape) down my trousers.” Smith added: “We made a poor choice. We deeply regret our actions. Coaches weren’t involved. It was purely the players in the leadership group.

“I can promise you it won’t happen again. It’s the first time this has happened.

“We will move on from this and hopefully learn something from it. I’m embarrassed. I feel for Cam. It’s not what the Australian cricket team is about. I am incredibly sorry.

“It’s a poor reflection on everyone in that dressing room and particularly the leaders in the group.”

When the ball was thrown to him, television footage showed Bancroft take an object out of his pocket before rubbing the ball, then putting something back in his pocket.

After footage of the incident was broadcast, a message appeared to be sent out to him on the field. He put the tape down the front of his trousers before being spoken to by on-field umpires Nigel Llong and Richard Illingworth.

At that point he turned out his pockets, revealing only a black cloth.

The umpires did not change the ball, and images of the incident on the big screen resulted in some booing from spectators.