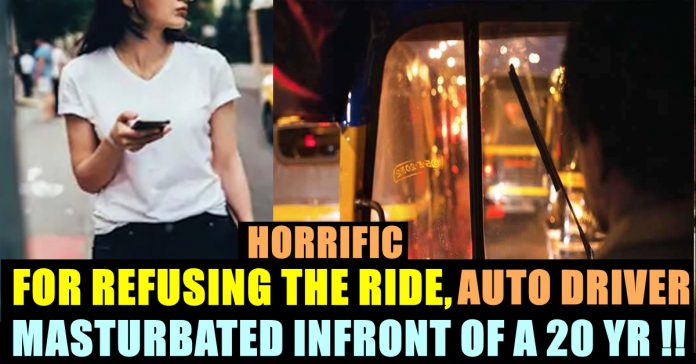 The arrested accused, identified as 32-year-old Mohammad Shakil Abdul Kadar Memon, a resident of Malwani, Malad (West), has a history of harassing women, said the officers.

Reports of the police suggests that the incident occurred on September 1 around 11.30 pm, when a 20-year-old woman was waiting at the bus stop at Chincholi Bunder on Link Road. Memon, in a way of asking the woman to get on his vehicle, parked it close to her nearby the bus stand. However, the woman refused the ride.

“The woman showed courage and clicked the accused. She also called up her mother even as the accused fled the spot,” said the police. They went to the Bangur Nagar police station where a first information report (FIR) was registered against the auto driver. Based on the complaint, a case has been registered against the auto-driver under section 509 (Word, gesture or act intended to insult the modesty of a woman) of the Indian Penal Code (IPC), said an official.

“After the case was registered, we started searching for the accused and learned that he drove somebody else’s auto on a shift basis. We checked CCTV footage of the locality and questioned several auto drivers in Malad, Goregaon and Dahisar,” said Chimaji Adhav, police inspector of unit 11.

Then they discovered the accused and he is under the custody of the Police. Further investigation and legal processes are currently underway.