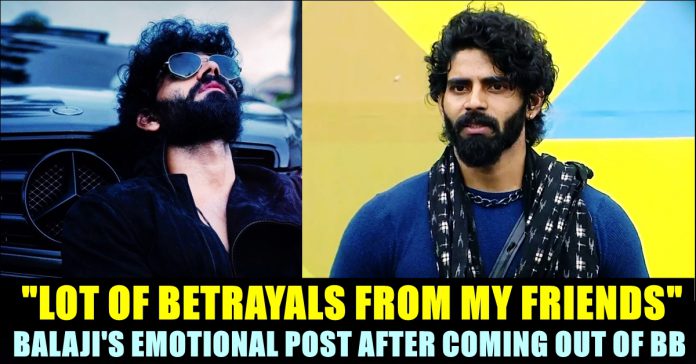 Throughout the show, Balaji’s activities attracted a sum of followers and the model earned haters as well. Now, Balaji who said that he did what his heart said to him during the final speech, has came up with an Instagram post thanking his fans and followers. “I just want to say thank you to all my fans for supporting me on this wonderful journey and to my doubters who kept pushing me to work harder and be better. Thank you for your time, love and positive energy. Again, Thanks a bunch! 😃” said Balaji Murugadoss through his post by adding a picture reiterating that every vote that was casted to him is a trophy.

Through an Instagram story, Balaji said that his friends from close circle betrayed him while he was staying inside the Bigg Boss house. “Hey machas thambi sisters Bala here. Romba nandri makkas love you all da !! lot of betrayals from my friends and close circle when I’m inside but you guys stood for me like a pillar, always grateful!! No regrets. Played my heart out. Enjoyed these 105days” he said through his post and added “Enakkaa Red Card-uh, Eduthu Paru Record-uh” song from Simbu’s “Vantha Rajava Thaan Varuven” in the background.

Meanwhile a video of the contestants celebrating the success off Bigg Boss season four is doing rounds in social media media platforms where Balaji could be seen feeding cake to Aari Arjunan, Sanam Shetty and Ajeedh. He also looks very much enthusiastic in the video.