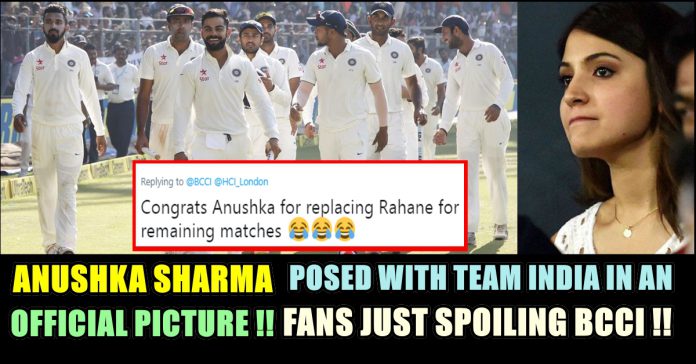 The High Commission of India in London hosted the Indian cricket team on Tuesday and the BCCI’s tweet on the occassion has drawn the ire of the social media sphere. The image was put up with the caption “#TeamIndia members at the High Commission of India in London,” and the fact that the image also included Bollywood star and Indian captain Virat Kohli’s wife Anushka Sharma is what seems to have caught everybody’s attention. None of the other players’ partners are present in the picture apart from Anushka. The Indian team are in London for the second Test against England that will be played at Lord’s starting on August 9. #TeamIndia members at the High Commission of India in London. pic.twitter.com/tUhaGkSQfe

Check out the comments :

Vice captain is in last row and First Lady of Indian cricket is in front row. These people giving lecture online few days back. @AnushkaSharma

Why @BCCI allows someones wife at official tour…. Please confirm Is your team mens are at work or on honeymoon

So I guess all other members are bachelors…

What rubbish? Why should there be a special rule for a captain?
CC @imJR_4

Why is Anushka here lmao?
She is at the center while the vice captain is at the end lol whatta joke

No Hard feelings but I heard recently BCCI denied players from having their wives around when on tour in England. WTH is Anushka doing among Indian team?? Rules are meant for Team and captain should lead from front in every aspect. Just saying

why is anushka sharma there? she’s not a part of team india. this isn’t acceptable

We know BCCI for cricket, not for Bollywood. So plz don’t show other’s

Very unprofessional @BCCI. This doesn’t look sound. Where is the Vice Caption hidden? Who is anushka Sharma in Indian Cricket. Why is she given this position? She is a celebrity doesn’t mean she hold more imprtance than a Vice caption of the cricket team! Any answers @BCCI

What is Anushka is doing there?

Is anushka sharma team member of indian cricket team??? What a joke. Why is she in this photo

Some were pointing out that the very presence of Anushka Sharma is wrong and there were others who noted that the vice captain, Ajinkya Rahane was at the back of the pic. The image was uploaded on the Indian Cricket Team Instagram page and was met with the similar reactions.

Kohli was in imperious form during the first Test at Edgbaston. He scored 149 in the first innings and 51 in the second. India lost the match but Kohli’s performance has been hailed as one of the greatest by any batsman on the ground.