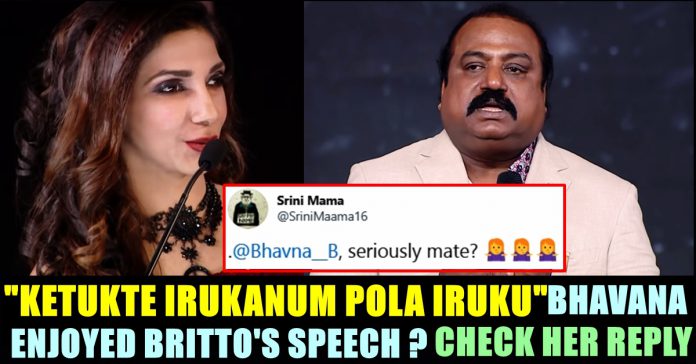 Anchor Bhavana who hosted “Master” audio launch denied appreciating the speech made by Xavier Britto who produced the 64th film of actor Vijay. She denied while replying to Srini Mama, a popular parody account of former BCCI chairman Srinivasan who shared a particular clip of the anchor appreciating Xavier Britto. The launch was hosted by Mirchi Vijay and Bhavana which was telecasted on Sun Tv on Sunday.

The most expected aspect of the audio launch, is the the speech of actor Vijay who entered the launch by wearing coat, suit unlike his previous audio launches. He said that he wore it by having his friend Ajith kumar as inspiration. As usual he also narrated the Kutti Story he would always tell his fans and mentioned the latest IT Raid in a humorous way.

Though Vijay impressed his fans through his speech, the one who grabbed the attention of netizens is Xavier Britto who produced “Master”. Actor Vijay mentioned him as his “uncle” during his speech and the way Xavier Britto delivered his thanks speech became a subject to online trolls. His long thanks speech made netizens to compare his speech with a speech of Christian priest. Many memes and trolls emerging in daily basis since the speech got telecasted. (Also Read : Not Vijay Or Vijay Sethupathi , This Man Steal The Show !!)

In the video shared by Srini Mama, we can see Bhavana saying “You have been giving a beautiful and wonderful speech, We wish to hear it forever”. Sharing the tweet Srini Mama asked “seriously mate?” by tagging her original twitter account.

Bhavana immediately replied to him by asking him to watch the full video to know what actually happened. “Can’t respond if only half of what I said is played. if you did watch the show you would know.”

Can’t respond if only half of what I said is played 🤷🏻‍♀️ if you did watch the show you would know. https://t.co/G4N3Bdj603

In the full video, we can see Bhavana trying to put an end to the speech of Xavier Britto. The producer of the film will not listen to the “Thank you” uttered by Bhavana and would continue to deliver his speech.