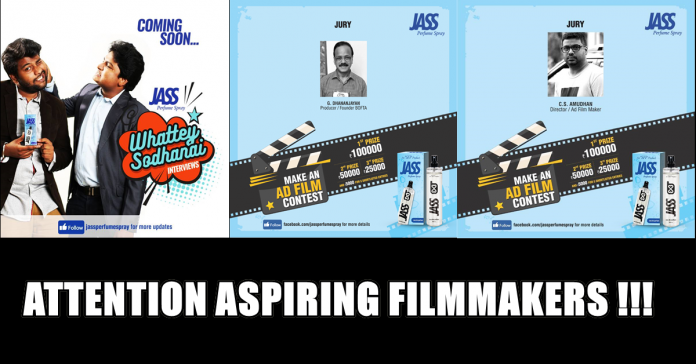 The participants has to do films according to the requirements of the conductors of the show. As the topic of the contest is “INTERVIEW”. It should be highlighting any one of the three points that is mentioned below,

As it is demonstrated in the video below The Ad film should visually show how to use the Jass Perfume Spray.

Usage of any one of the Package of Jass Perfume is must.

Participants can choose to shoot their film in any camera format such as mobile camera,SLR,DSLR etc.

The Ad film should be an original unpublished work and free from any copyright issues of music, script and other creative and technical aspects of the film.

Entry form can be downloaded at www.worldofjass.com

The ad film must not contain any nudity, lewd or otherwise offensive or inappropriate content.

Five shortlisted filmmakers will get 5,000 as condolence prize money as well.

G.Dhananjayan, a renowned producer and the founder of BOFTA University and C.S Amuthan, filmmaker are announced as the juries of the Jass Perfume Spray Ad film contest. What are you waiting for filmmakers!! Hurry Upp !!