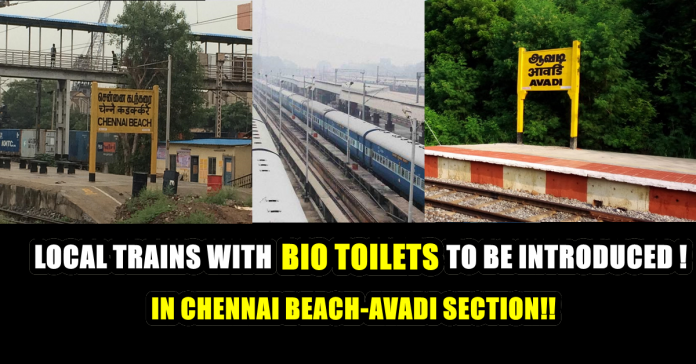 Rail passengers in the western suburban section of Chennai, who face hardship in attending nature’s call due to lack of toilet facilities while travelling in EMU local trains, will get relief soon. The Southern Railway has decided to introduce two Mainline Electrical Multiple Unit (MEMU) trains between Chennai Beach and Avadi sections, with attached bio-toilets.Recently, the Chennai division of the Southern Railway has received two rakes of MEMU trains, each with nine coaches. A rake comprises three units — each having one motor coach and two trailer coaches. The seating capacity of motor coach is 76, while that of trailer coach is 108.

Chennai division of Southern Railway has recently acquired two rakes of MEMU trains trains, each with 9 coaches. Talking to the New Indian Express, a senior official said, “Compared to the conventional Electrical Multiple Unit (EMU) trains, the MEMU trains can accelerate faster and run at a pace of 105 kmph. The trains are also preferred as every coach has toilets,” said a senior railway official.The two MEMU rakes received from Kapurthala are being commissioned at the Avadi car shed.”The electrical fittings and bio-toilets are commissioned in the coaches. After completing due procedures, two rakes will be initially put into operation between Avadi and Chennai Beach. Later they may get extended to Chengalpattu or Kancheepuram,” the official added. The MEMU trains are expected to provide huge relief to thousands of elderly rail commuters, patients and women who travel in suburban trains. Currently, the Chennai division caters to more than 10 lakh passengers with 545 EMU and MEMU train services. Passengers travel for 10 minutes to 2.5 hours in suburban trains. MEMU trains are operated in the Vellore Cantonment-Beach-Thirumalpur, Chennai-Tirupati, Chennai-Tiruvallur and Chennai-Gummidipoondi sections.  They have no toilet facilities. While a few DEMU (Diesel Electrical Multiple Unit) and MEMU trains with toilets have already been introduced in Kerala, MEMU rakes with attached toilets are yet to be introduced in Tamil Nadu. In 2015, a DEMU train was introduced in the Salem-Vriddhachalam section with toilet facility.