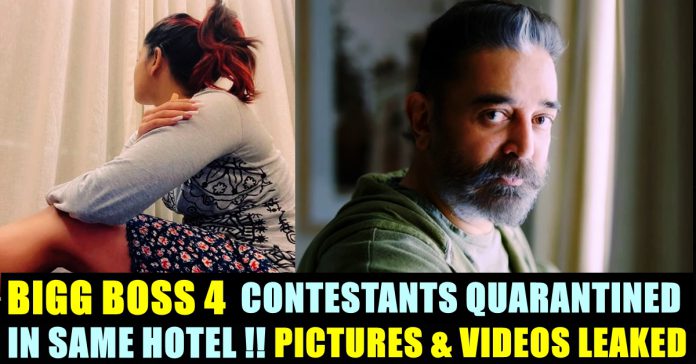 While the participating contestants of BIGG BOSS 4 have been almost confirmed, reports suggested that they have been quarantined before going to the Bigg Boss house before living together as a family. Now, the pictures and videos of participants being quarantined in hotel rooms have been surfaced in Internet.

Big Boss 4 is all set to stream from the first week of October month and the makers of it are busy producing promotional videos for it by having actor Kamal Haasan as the main man. Speculations on the 14 participants are doing rounds in social media platforms. So far Ramya Pandiyan, Gabriella, Shivani Narayanan, Anu Mohan, Rio Raj, “Jithan” Ramesh, Singer Aajeedh, VJ Archana, Sanam Shetty are being considered as confirmed contestants.

Now, going by the social media posts of some of the above mentioned celebrities, we can see them staying in a room which has similar interior patterns which means they have been quarantined in a same hotel before participating in the reality game show.

Shivani Narayanan who is known for being active in Instagram, uploaded a series of pictures in which she can be seen sitting alone starring at empty wall. She has captured the pictures through timer it seems.

Check out them below :

Actor Rio Raj who recently debuted as protagonist through “nenjamundu nermayundi Odu Raja” can be seen spending his time in a similar room.

Actress Ramya pandiyan who rose to fame among Internet users through her casual photoshoots also uploaded a video from a hotel room, according to reports.

Both #rio & #shivani being quarantined for Bigg Boss Tamil Season 4. 😄😄😄😄
All in the same hotel…#BiggBossTamil4 #BBTamil pic.twitter.com/CjXXH6EyLp

The latest one to join the presumed list of contestants is folk singer Vel Murugan who sang the popular “Oththa Sollala” from Aadukalam.

Kiran Rathore, Shalu Shamu are some of the other names that are doing rounds in social media platforms linked to the contestants list of Bigg Boss 4. However, we have to wait till the first week of October month to know the complete list.

Comment your views on the participation of these celebrities in Bigg Boss 4 !!