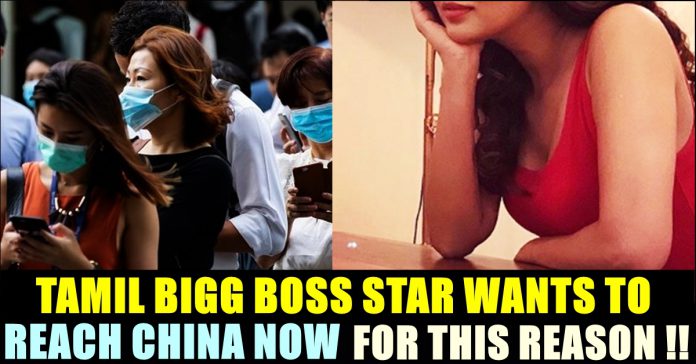 Bigg Boss star Raiza Wilson who is posting her views about the social injustice for past few days, has posted a tweet saying that she is ready to personally go to the lab where the Coronavirus is created. She also called her followers to go with her. Due to the lockdown implemented by the government, many fields getting affected. Many people are looking for alternative ways to stay afloat in this Global pandemic. We are even witnessing people who are switching careers altogether to survive. Cinema industry is no exception as people who belong there are struggling to survive except the top few actors and technicians.

Raiza Wilson who has a number of movies line up including a Yuvan Shankar Raja production, is also finding it hard to finish her projects. Earlier she questioned the central government on why they couldn’t pay for the doctors who are risking their lives to save patients. Now, she came up with a tweet writing “Honestly, if there’s solid proof that this corona virus was created in a lab and meant for this s#%^* Im personally going there and ….. Who’s coming with me ?”

Who’s coming with me ?

She also posted a tweet saying that she wants her work to start, and also wants everyone to be safe. “Wat is this corona ? Is it here for a purpose ? Is it intentional by someone who assumes they know better, for the better ?? Are we done learning? How much more do we have to grow through this ?” she asked in her tweet.

I want my work to start, but I also want it to be safe for everyone.
Wat is this corona ?
Is it here for a purpose ?
Is it intentional by someone who assumes they know better, for the better ??
Are we done learning?
How much more do we have to grow through this ?

The whole world is terrorized right now and is combating the deadly disease COVID 19 to avoid heavy damages. The virus killed more than 4,28,740 people across the world so far and is expected to spread more. Every countries are implementing safety measurements such as social distancing and maintaining hygiene. The disease initially discovered in China and the most affected country due to the disease is Italy. However, the main, accurate reason behind the virus is still undefined.

It is highly believed by a large number of people that the country China is has created this virus to defeat other countries financially. In 1999, a book on military strategy named as “Unrestricted warfare” was written by two colonels in the People’s Liberation Army, Qiao Liang. The book concentrates on how a nation such as China can defeat a technologically superior opponent such as the United States through a variety of means. “Defeating the economy of United states is the only way to defeat such nation” is what the book feeds to its readers. Reports suggested that China using this method to defeat its competitors.

Now, this post from actress Raiza has made her followers to say that they are ready to go to China. Check out some of her reactions :