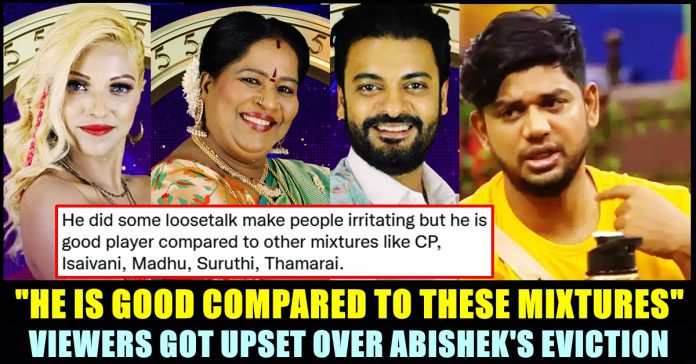 Abhishek Raaja became the second contestant of Bigg Boss season 5 to get eliminated from the show. He who got evicted after getting less number of votes among the fans, got the offer from his co-contestants such as Pavni Reddy and others to receive special coins from them in order to avoid eviction. However, Abishek refused to receive them saying that he can’t continue his game after knowing public’s verdict. The movie reviewer left the house after having a long chat with Kamal Haasan by leaving his co-contestants in utter shock.

As soon as he got evicted, a number of fans expressed their frustration over the analyst getting evicted so soon who was busy providing content for the viewers of Bigg Boss. They felt other contestants such as Abhinay, Iykki Berry, Chinna Ponnu re not much active and never involved in doing something impulsive as much as Abishek.

“You people didn’t value him. Eventhough i hate him he was much better than some people in the house and it’s best if he goes out. Some contestants used him as a scapegoat to become popular” a social media user said after abishek’s eviction whereas another one said “Abhishek truly was not as bad as the 1st runner of BB Tamil season 4”

Not some people saying now that #Abishek is gone there will he no content. You people didn't value him. Eventhough i hate him he was much better than some people in the house and it's best if he goes out. Some contestants used him as a scapegoat to become popular.#BiggBossTamil5

#BiggBossTamil5
People last week: Vtv will evict CP to save #Abishek for content. Biased. 👎
People this week: Vijay TV wantedly evicted #Abishek instead of mixtures like CP. Biased. 👎@vijaytelevision be like 👇👇 pic.twitter.com/Z8yskBwzl4

#BiggBossTamil5 even though #abishek was cringe, he was giving a lot of content

#BiggBossTamil5 End of Week 3:
Abishek Raaja's journey in the house comes to an end… "CinemaPayyan" is out now!

He gained my respect when he said he have to respect audience's verdict.. everyone has their flaws but you don't deserve this hatred #Abhishek #BiggBossTamil5