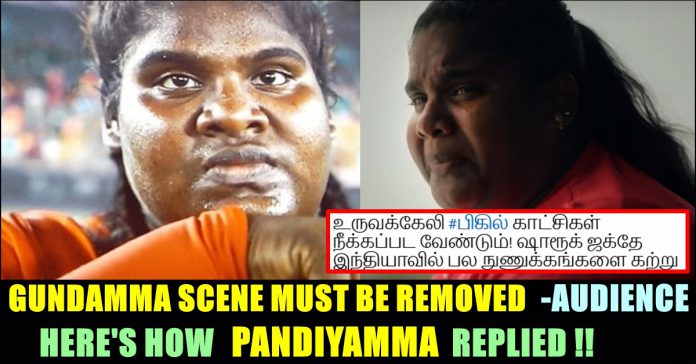 Director Atlee who is known for his collaboration with actor Vijay, is one of the highest paid directors in Kollywood. Being a former assistant of Shankar, Atlee’s way of presenting his films and the castings he choose for the characters are considered as his major qualities. All the three films of Atlee became blockbusters despite of the plagiarism controversies. His latest film “Bigil” hit the screens as Diwali release and making big numbers in box office as well.

During the final game of the match, in which Vijay’s team would require three goals in 40 minutes, the protagonist would start scolding his players for their inability in order to motivate them indirectly. In that process, he would call one of a player as “Gundamma” (Fat lady) which would offend her personally. To prove herself in the ground to her coach, she would score a tremendous goal, using her body strength and would thank her coach for his motivation.

However, this doesn’t go well with some of the audience who felt that “fat-shaming” is not a way to motivate a player. They expressed their thoughts through micro blogging social media platform, twitter. Check out some of their reactions below :

Some things left me squirming though, particularly the “Gundamma= motivation” sequence or the company Kudu part x(

But tell me, if you’re reducing the identity of a woman again to overcoming patriarchy or a general aesthetic or a body type how is it really empowerment ? 🙁

And did he call Robo Shankars daughter "Gundamma" to motivate her or was that the cocaine I took during the interval?#Bigil

Calling the woman gundamma to motivate her? No, women have not taken back that word. It is still a belittling word.

The whole movie was made by men for men. NOT FOR WOMEN.

However, Indhraja, popular comedy actor Robo Shankar’s daughter and the one who played the “Pandiyamma” role, in an earlier interview said that Vijay hesitated a lot before doing that scene. In the video, we can see her saying that Atlee and Vijay asked for her permission multiple times and shot the scene only after her consent. She even said that the actor apologized to her for calling her by that name.

Watch the clip below :

What do you think on this scene featured in Bigil ?? Comment your views below !!