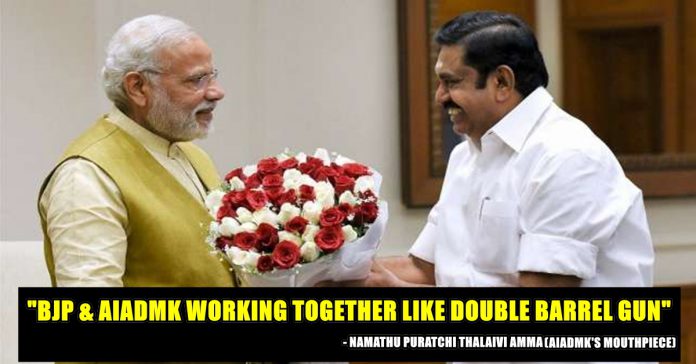 In politically significant remarks, the ruling AIADMK today said that signs of its working together with BJP like a “double-barrelled gun” in the political arena were visible and “no one can sever ties” between the two parties. Coming out strongly against the principal opposition DMK-led persistent protests over the Cauvery imbroglio, the AIADMK said “whatever be the number of protests and demonstrations, no one can sever the ties between the AIADMK and the BJP.” No one can weaken the bond between “the Central and the State governments” either, the AIADMK said in its Tamil mouthpiece “Namadhu Puratchi Thalaivi Amma.”

The official mouthpiece of EPS — OPS led AIADMK Namadhu Puratchi Thalaivi Amma, said  whatever be the number of protests and demonstrations, no one can sever the ties between the AIADMK and BJP. “No one can weaken the bond between “the Central and the State governments” the article said. Coming out strongly against the opposition DMK-led protests over the Cauvery issue, which the AIADMK said were only aimed at spoiling the warmth between it and the BJP, the ruling party said “whatever be the number of protests and demonstrations, no one can sever the ties between the AIADMK and the BJP.”

The state’s ruling party said the protests by the DMK, its allies and friendly parties on the Cauvery issue were only aimed at spoiling the warmth between it and the BJP. “The signs are (increasingly) becoming visible for the AIADMK and the BJP to work like a double-barrelled gun in Indian politics. Emphasizing the need for top leaders of the two parties to chalk out a roadmap for the purpose, the ruling party said the State and the Central regimes led by AIADMK and BJP respectively are working responsibly and are headed towards a final resolution of the Cauvery issue. The main opposition DMK was holding “unnecessary protests” as it was “apprehensive” that the State and the Central governments, working in cohesion, would succeed in resolving the Cauvery issue.

Mocking the DMK for holding protests which did not enjoy the “people’s support,” the AIADMK hit out at its rival for trying to get an appointment with Prime Minister Narendra Modi now on the issue after attempting to show black flags to him recently.

Asking if it was an act of “political civility,” the AIADMK mouthpiece said no other party could indulge in such politics burying its self-respect. The daily, however, asked if the protesters succeeded in showing even a single black flag to Prime Minister Modi.

It may be recalled that the AIADMK top leadership has been maintaining that a friendly relationship with the Centre was imperative for the progress of the state through proper financial sanctions and support.

The DMK, however, has been unrelenting in its attack saying the ruling party was “subservient,” to the Centre.

Notably, the AIADMK’s assertion comes days after asking the Centre to change its mindset over the Cauvery issue. On April 13, the party’s mouthpiece had said, “Without waiting anymore, it will be good if the Central government changed its mindset and avoided partiality.” If this was not done, “it will lead to cracks in the unity and integration” (of the nation), it had cautioned.

The DMK-led Opposition and the pro-Tamil outfits have been holding back-to-back protests including the recent anti-IPL stir on the river water issue and a massive human chain demonstration (by DMK and its allies) has been announced across the state tomorrow. The ruling party, after holding a day-long fast across Tamil Nadu on the issue earlier this month, has announced rallies between April 25 and 29 in the delta region to press the Centre to implement the Supreme Court verdict on the matter. Following the February 16 Supreme Court verdict, Tamil Nadu has been insisting that the court’s order to the Centre to formulate a “scheme” referred to the setting up of the CMB and the Cauvery Water Regulatory Committee (CWRC).

The Tamil Nadu government recently moved the top court, seeking contempt action against the Centre for its “failure” to frame the scheme for the constitution of the CMB and the CWRC within six weeks from February 16. The court had on April 9 asked the Centre to frame a draft Cauvery management scheme and file it by May 3 for the implementation of its order on water distribution. The article comes days after the mouthpiece carried a scathing poem criticising the BJP at the Centre.

Meanwhile, according to a report in the Times of India, BJP State Secretary Vanathi Srinivasan said, We don’t know the intention behind the article. It is up to the party leadership to decide on alliances. At present I don’t think there are signs of such development. The Centre will extend whatever help needed. As far as the party (AIADMK) is concerned, policy based support is given. There is ample time to decide about alliance.”