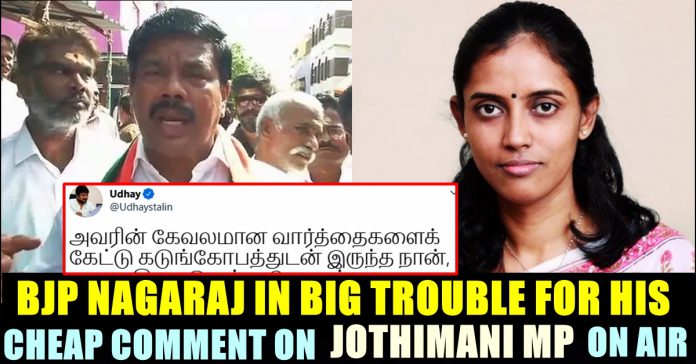 A hashtag “I Stand With Jothimani” is trending nationwide in the micro blogging social media site after BJP political party’s prominent member Karu Nagarajan made a derogatory comment against Congress party’s Jothimani who is a member of parliament for Karur district. The incident took place during an interaction between various members of different parties from Tamilnadu politics in News 7 channel. As soon as the video of this incident took place, many leaders from various parties condemned the act of Karu.Nagarajan.

When Nelson Xavier, a reporter who hosted the show asked a question to Karu.Nagarajan on why migrants are walking in the highway roads to reach their home, Karu.Nagarajan, instead of answering to his question, made an irrelevant statement against Jothimani. “If a train starts from Tamilnadu, it must surpass Andhra or Telangana or Orissa. State government could not make a decision regarding it. Prominent duty of a central government is to organise such facilities. My intention is not to blame central or state government. I am just asking why people are walking on roads to reach their home ??” asked Nelson to the BJP member.

Karu. Nagaraj, instead of replying to Nelson’s question, said “I want to answer sister Jothimani. Is she really a member of parliament or a cheap woman?? How could she say that she will attack Prime minister with stone” he asked which created a huge furore in the interaction which consisted three other members from different political parties.

Despite of several warning from Nelson who asked him to vopus his statement and tried to convey that there should not be “Individual character assassination” in a public interaction, Karu. Nagarajan kept making statements against Jothimani which made her to leave the interaction in half way.

In her official twitter account, Jothimani wrote that she walked out of the interaction of News 7 due to derogatory statements made by a third rated person , Karu.Nagaraj. “I will fight against BJP’s obscene politics through my field work. I Thank to all those who are showing love and support towards me” she wrote in her tweet.

From Udhayanidhi Stalin to MeToo activist Chinmayi, many people come forward to support the Congress leader.

✓ It reflects Anti-Women perspective of BJP.
✓ BJP owes an apology to all women for his such shameless misconduct..#I_Stand_With_Jothimani

Karu Nagarajan, BJP spokesperson abuses @jothims MP from Congress Party in a live TV debate by saying that she is a person of 'low birth'. What else you expect from a Brahmin-Baniya party, whose leader is a lowlife? #I_Stand_With_Jothimani

I pity the BJP panelist who abused @jothims. It seems for him his only claim to fame in this lifetime would be his caste.

Pls don’t take offence, u r way above such people’s low mindset, who live in their own la la land. He only deserves ur pity ma’am. #I_Stand_With_Jothimani

#I_Stand_With_Jothimani
Abusing women have always been their pattern. And especially the women who speak up and who have a voice are always attacked. @jothims stood up against him and quit the show.

It is pathetic, no doubt. I have always called out abuse and regardless of political party, every woman politician is abused in some way form or the other. But you want me to ALWAYS prove a point ONLY because it is BJP or each time some BJP man is abusive. Get over your bias

BJP spokesperson Karu Nagarajan in a debate in a Tamil channel abuses Congress MP Jothimani by calling her a person of 'Low birth'! Goes further & says she is of the 'low ilk of society'!

Ironically, TN BJP has a Dalit as its President!

It is not the first time a BJP party member finds himself amidst trouble for making derogatory comment against women as S.Ve Shekar faced severe criticism for making insensitive statement against working women, years ago.