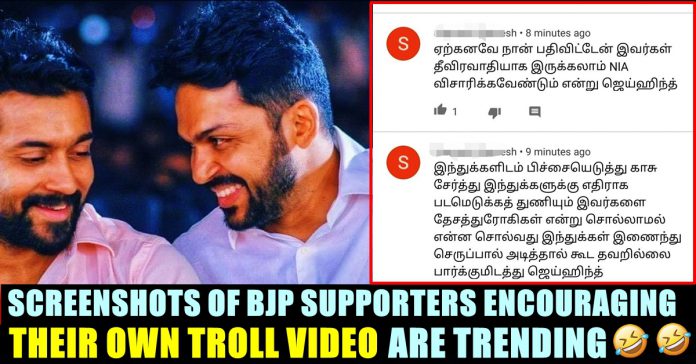 After Suriya and Karthi expressed their thoughts on central government’s new EIA 2020 draft, Internet came up with various reactions opposing and supporting the duo. A youtube channel named as “Second show” posted a parody video on how BJP supporters would react after knowing about Suriya and Karthi’s stand. Unaware of the video’s context, supporters of the ruling party encouraged the maker to create more videos which left the users of the micro blogging social site in splits.

Suriya and Karthi came up together to raise voice against the new EIA 2020 draft of Indian government. Followed by Karthi’s press release on behalf of his Uzhavar foundation, Suriya expressed his views while sharing the tweet. Followed by several people from public and political party members, actor Karthi Sivakumar became the first cinema celebrity to raise voice against the EIA 2020 draft. The actor, in his post, has said that the proposed EIA 2020 Draft has instilled new fears in the minds of the common man and experts.

He said constructing heavy industries with irrecoverable cost cannot be considered as a success and development of a country in his post. He said that the endeavor will be seen as an exercise to systematically dismantle a promising future of our generations to come.

He questioned the government on the Posto facto clearance and diluted impetus on public hearing and public consultation. He also questioned why the draft has been published only in Hindi and English when there are millions of Indians from Kanyakumari to Kashmir who knows only their native language. He insisted the government to publish the draft in all the languages. The actor who questioned the emergency of implementing this draft amidst COVID 19 pandemic, asked public to raise their voice against it by sending mail to [email protected]

Suriya, sharing the tweet, said that keeping mum in such issues are dangerous. Let’s save our environment by talking about this, he said in his tweet.

Supporters BJP party, including actress Gayathri Raguramm criticized both of them and asked them to support DMK party directly. The youtuber who runs a youtube channel named as “The Second Show”, made a parody video on how BJP supporters would react to the tweets of Suriya and Karthi.

In the video which was titled as “Boardu Doss”, the youtuber said that the family of Suriya are working for Congress party as Suriya’s debut film was “Nerukku Ner”. He also said that they are being backed by DMK leader Stalin as ADMK leader J.Jayalalitha attended their marriage functions. At one point, he mentioned Karthi’s Alex pandian and Paruthiveeran to say that he is supported by Christian missionaries and Muslim community.

Now, the youtube channel posted a tweet saying that many BJP supporters are motivating them to do more videos without understanding the context of the video. “Hundreds of comments from “Sanghis” are supporting me for abusing Karthi. They are sending me texts, sharing the video and appreciating me since the video released. They are asking me to scold Suriya and Karthi more.” wrote the Second the show.

“I have clearly mentioned that it is an imitation and spoof in the beginning of the video. Leave new education policy apart, bring a basic education policy for Sanghis. They are sharing my videos sincerely” the channel added in their tweet.

This tweet is being widely shared in twitter by other users with hilarious captions. Comment your views on the parody video and the reactions it received !!