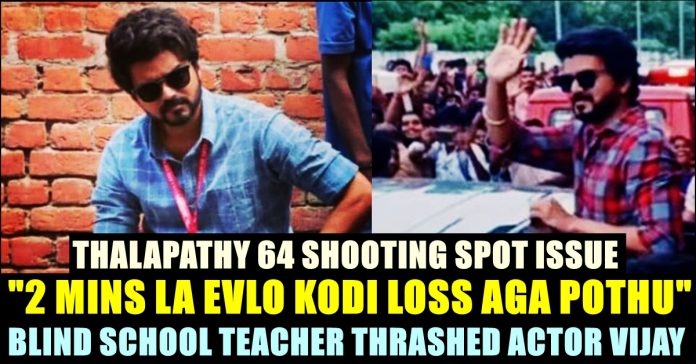 The shooting of Thalapathy Vijay’s 64th film is being progressed in full swing. A sum of talented and high profile actors including Andrea, Shanthanu, Vijay Sethupathi, Antony Varghese has made it to the cast list of the upcoming film which is tentatively titled as Thalapathy 64. Produced by Xavier Britto, the film’s music is going to be composed by Anirudh Ravichander.

Actor Vijay is one of the very few actors who has huge fan following in South India. Having acted in more than 60+ films, he is in the top race to become the highest paid actor in Kollywood. The initial stage of shooting took place in Delhi. After that the movie crew moved to Chennai and the next stage of the film is being shot.

“The shooting of your Thalapathy 64 took place in our school for three long days. Generally we teachers and students didn’t like to permit any kind of film shooting in our school. But you people bought the permission with your personal influence” read the post of the teacher who teaches the visually challenged students.

Further he complained about the attitude of the crew members of the movie who acted like they own the entire place for the three days. “The way your crew treated our children and servants was atrocious” he said in his post who also said that many of them smoked cigarettes irrespective of the existence of students. The crew members even sent back the volunteers who came to help the students in reading, according to the facebook post.

Followed by this Saravanan explained how actor Vijay didn’t respect the feeling of the students who waited for a very long time to meet him. “When our students gathered to meet you, you waved your hands by thinking that they are your normal fans. When they questioned your crew members, they abused the disability of our students.

To end their expectation, we decided to arrange a two minute meeting for our students with you. When we approached your manager Mr. Udhayakumar around 4 pm, he said that we can meet you around 6 pm. Even director Lokesh Kanagaraj interacted with the students for 2 minutes. But you never made your presence. After waiting for one and hour hours, without knowing that you went through secret exit, our students waited 30 minutes more” said Saravanan who blamed the actor for not considering the visually challenged students as his fans.

However, this post doesn’t go well with the fans of actor Vijay who started abusing the teacher in the comment section. What do you think on ths post of Saravana Manikandan ?? Comment your views below !!