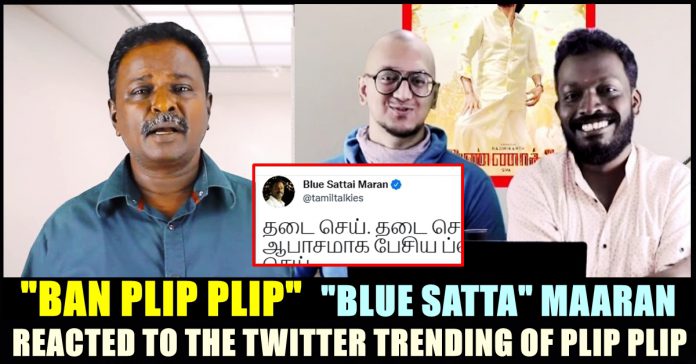 Popular Tamil movie reviewer “Blue Satta” Maaran reacted to the twitter trending of “Plip Plip”. In a sarcastic tweet, the Twitter handle of “Blue Satta” demanded the ban of “Plip Plip” for abusing “Thalaivar”. He also shared a tweet in a timeline, capturing the screen shot of one of the comments that trolled him.

In their review, Sarvs and Gurubhai pointed out the flaws in “Annatthe” and roasted it in their own way. The video is currently trending with 3 lakh plus views in the youtube platform. Sarvs says that he felt like listening to the laments of a drunkard while Rajinikanth started his narration in “Annatthe”. The duo also parodied the dialogues of “Annatthe” by replacing abusive words to the original dialogues.

Sarvs and Gurubaai, while talking about the chemistry between Kaalaiyan and Pattamma played by Rajinikanth and Nayanthara respectively, said that the level of intimacy between Kaalaiyan and Thanga Meenakshi, Kalayan’s sister role played by Keerthy Suresh looked a bit higher. Sarvs also mentioned the reference of 2003 released Korean action thriller “Old boy”, story of which revolves around a father and daughter maintaining an intimate relationship between them without each other’s knowledge.

Many, including movie reviewer Prashanth expressed their disappointment over the way “Annatthe” was roasted by “Plip Plip”. Prashanth, to the fans of all the actors, said that the makers of “Plip Plip” who are abusing every actor will also abuse the sisters and mothers of the viewers. Hashtag “Plip Plip” is trending in Twitter since morning.

Check out some of the reactions :

Plip plip shit heads openly age shaming one of THE top star in kollywood,Abusing with such foul words.With the title Annaatthe incest in description.Sexually harassing women as "Butt"amma.Aren't we gonna do anything about this?

It's okay to hate a film& register your opinion but personal attacks,& unparliamentary language should never ever be encouraged. Sad that a section of youngsters enjoying it. @CMOTamilnadu should take strict action against #PlipPlip YouTubers. Their#Annaththe roast is 😡😡

I strongly support this as a movie buff talking unwanted sexual refference dialogues in context of the film should be stopped as an cost.. kudos to @itisprashanth for speaking on point at once… #PlipPlip https://t.co/trJtM4MLRr

Meanwhile, Blue Satta Maaran who is also known for roasting Tamil movies, came up with a tweet saying “Ban Plip Plip who degraded Thalaivar” in a sarcastic manner.

Check out some of the other tweets of “Blue Satta” Maaran below :