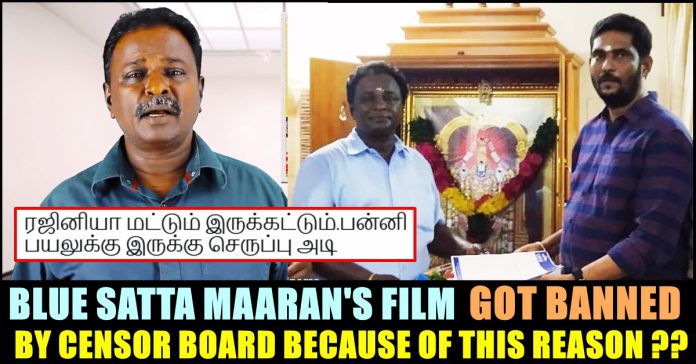 Film distributor, Producer, Actor and politician JSK Gopi, on Thursday uploaded a tweet in his official twitter account, revealing the most probable reason for the censor board ban of reviewer Blue satta Maaran’s upcoming film “Anti Indian”. Though it is not known whether it is true, the tweet of the film industry related personality is doing rounds in social media platforms.

After Censor Board refused his film “Anti Indian”, Bluesatta Maaran, on Thursday, came up with a tweet in his official twitter account saying that he has approached the revising committee for reconsideration and assured that his film will get released at appropriate time. Reacting to this tweet, many of his followers wondered what he would be the plot of the film that made censor to refuse and suggested him to release the film in any of the OTT platform.

On Wednesday, it was reported that the film “Anti Indian” of Blue Satta Maaran got banned by censor board and left the Internet talking about it. To clear the air on the various kind of speculations, trolls and predictions, Maaran uploaded a tweet and confirmed the release of his debut film.

Few days back, #AntiIndian movie was screened to the Censor Board team. After watching the film, The board refused the film.

As a result, We have decided to approach the revising committee for reconsideration. The film will be released at appropriate time.

Now, JSK Gopi who runs a film priduction and distribution company named “Sadhana pictures” uploaded a tweet saying that a well known top actor got degraded in the film made by Maaran. “It is said that a top actor was humiliated in a most distasteful way in the film made by Blue Sattai Maaran” said Gopi in his tweet by writing “Blue சட்டை மாறன் படத்தில் உச்ச நட்சத்திரம் என்ற பெயரில் ஒரு நடிகரை மிகவும் தரம் தாழ்ந்து இழிவு படுத்தியிருக்கிறார்ளாம்.”

Most of the people who commented on the post believed that it could be Superstar Rajinikanth. Check out some of the reactions below :

However, we have to wait till the official clarification from Maaran himself or his film to get released to confirm the same. Maaran is one of the controversial reviewers in the industry as he had clash with the makers of the films often. “Goli Soda” Director Vijay Milton condemned him for the way he reviewed the movie “Vivegam” which had actor Ajith in the lead. A legal case was filed against him by “Amma Creations” Siva for the way he reviewed Charlie Chaplin-2 movie. In the review he criticized the makers by saying that they doesn’t have common sense.

He is very well known for his rural slang, funny phrases, short stories and the reference of real life incidents in his movie reviews. For his unique style of movie reviewing, the man who always wears blue shirt has a separate set of fan following and his youtube channel Tamil talkies enjoys million subscribers.