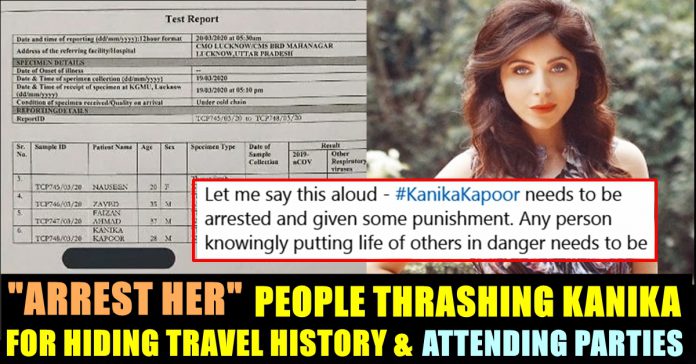 Kanika Kapoor, a popular bollywood singer who is known for singing songs such as Baby Doll and Chittiyaan Kalaiyaan, tested positive for the novel coronavirus on Friday. She got admitted in the King George’s Medical university hospital in lucknow. The 41 year old actress was in London for a while and returned to Lucknow last week. She also avoided informing the authorities about her travel history.

To our shock, the singer attended a lavish party in Lucknow with her friends and family at a Five star hotel after coming from London. The party which was hosted by a popular interior designer, saw the presence of several bureaucrats, politicians and socialites, as per reports. She reportedly stayed in a sprawling apartment in Lucknow. Medical authorities are unsure of the method that should be observed to quarantine the entire building where the singer stayed and also subject the guests at the party to tests, according to sources.

Check out viral video of the singer being shifted to the hospital after testing positive :

As soon as the news surfaced, users of Internet slammed the singer for being irresponsible. Her name trended at no.1 in the Internet with several people criticizing her decision of refraining from informing the authorities. Check out some of their reactions below :

Let me say this aloud – #KanikaKapoor needs to be arrested and given some punishment. Any person knowingly putting life of others in danger needs to be stringently dealt with as we battle #CoronavirusOutbreakindia

This woman should be charged with criminal negligence. Period.

There is this fruit vendor in my locality who wears mask, uses sanitizer while handling money.

Then there is #KanikaKapoor , a 'celebrity' who tests positive after hiding from authorities screening the passengers.

Fruit vendor is an asset to the Nation, Kanika is a disgrace.

"Mitron, we are screening everybody since Mid-Jan"

But #KanikaKapoor landed a few days ago, from a country with CoViD cases & escaped quarantine!

She then attended parties with MPs, who then went to Parliament & Rashtrapati Bhavan

Hundreds like #KanikaKapoor must be infecting thousands other knowingly or unknowingly. That's called community transmission and was expected as per the pattern. The Govt is NOT prepared to handle this situation and is going to blame #Covid19 patients & public when it breaks out.

#kanikakapoor episode just shows that Stardom & Money and privilege doesn’t guarantee minimum common sense. Their irresponsible behaviour can upset the fight against #coronavirus which till date has been reasonably contained in India pic.twitter.com/CpD3yozpjh

Criminal negligence by #KanikaKapoor to not self isolate after return from abroad and host and attend parties instead. Clearly education is no antidote to ignorance. But this ignorance is costing lives madam. Hotels should be barred from all parties. #Corona

What do you think on the way Kanika Kapoor responded to the measurements taken by the government ?? Comment your views below !!