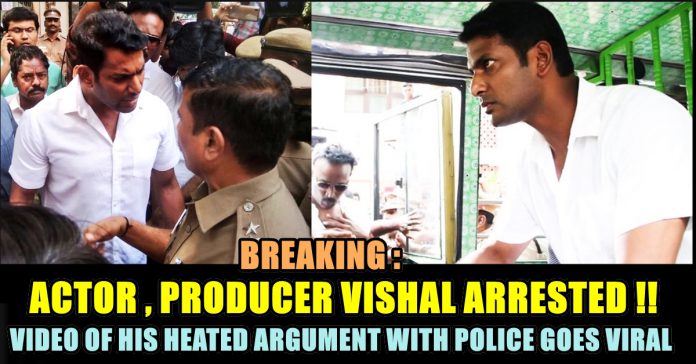 Reports suggest that Popular Tamil actor and producer Vishal has been arrested by Chennai police at Tenampett. According to the reports that have been doing the rounds, Vishal was arrested and moved by Chennai police this morning. According to a recent report by Samayam.com, Vishal had tried to break the lock of the producer’s council building at tenampet, which was closed by the a group of producers yesterday (December 20, 2018). Vishal is the President of Tamil Film Producers Council. Reports suggest that many of the producers are protesting outside the producer council office.

On December 19, few producers protested against Vishal and locked the association’s office in T Nagar and Anna Salai. They had also raised slogans against Vishal and his team for not fulfilling the promises they made during the election in 2015.

Today, Vishal, the president of Tamil Nadu Film Producers’ Council (TFPC), was detained by the police officials when he tried to break the lock to enter into the association’s office.

After the office was locked by a group of producers, police officials were deployed in T Nagar. When Vishal tried to break the lock to enter into the office, he was blocked by the cops.

For about an hour, Vishal was trying to put across his points to the police. However, the said they are acting upon the order posed by higher authorities.

Vishal asked the cops, “Are you supporting the unauthorised personnel who locked the office without informing us? What about the members who are supposed to go to the office? Who will be responsible for the loss of property?”

Speaking exclusively to IndiaToday television, Vishal said, “Unauthorised people came in and locked the office. I have respect for the police and I am here with them. I am willing to put forth the accounts and submit books. The general body meeting was called off because of Ilaiyaraaja’s concert. In March, we will have another general body council meeting.”

After a heated argument with the cops, they detained Vishal, Mansoor Ali Khan and other members of TFPC.

A complaint has been filed against Vishal by the producers for financial irregularities, but the cops haven’t filed an FIR yet.

#VishalArrested #Vishal for breaking the doors of Nadigar Sangam Gate

Vishal has filed a complaint against the producers who locked up the TFPC office in T Nagar. Reportedly, the police deployment outside TFPC office was to maintain law and order and prevent the two sides from clashing.