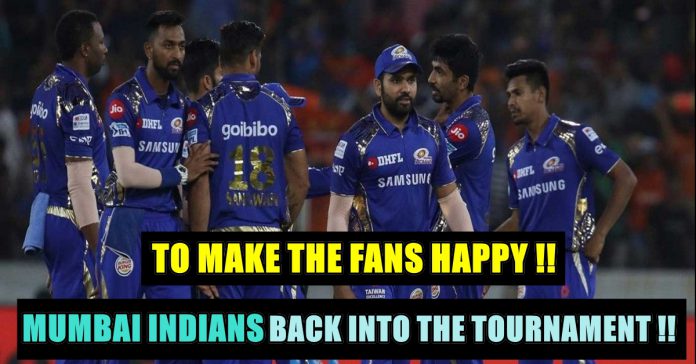 The Mumbai Indians Founded in 2008 are a franchise cricket team based in the city of Mumbai, Maharastra. Mumbai Indians are the most successful team in the IPL. They won the 2011 Champions League Twenty20 after beating Royal Challengers Bangalore. The team won the double by winning its first IPL title, in 2013, by defeating Chennai Super Kings and then defeated the Rajasthan Royals to win its second Champions League Twenty20 title later that year. They won their second IPL title on 24 May 2015 by defeating the Chennai Super Kings and became the third team to win more than one IPL title. On 2017, they won their third IPL title by defeating the Rising Pune Supergiant thus becoming the first team to win three IPL titles. They started the 11th edition of IPL as defending champions with very strong players having in its side. On seeing the winning streak of the Mumbai Indians team it is obvious that every other teams are scared of them. Captain “Cool” Rohit sharma’s calm and composed captaincy looked promising as they have won the last 7 out of 7 matches of last year’s tournament in order to qualify into the play offs where they won the tournament as well. In the attempt of recreating the history it is slightly slipped for the Mumbai boys this year which left the Mumbai fans in deep sorrow. Unfortunately Delhi daredevils who ended up being in the last place of the tournament knocked Mumbai out of the tournament in the do or die match. As the BCCI officials researched for the cause of the loss of Mumbai Indians, they happened to realize the fact which disappointed them in big time. The Board of Control for Cricket in India watched the match thoroughly for 4 consecutive times and to their shock it is captain Rohit Sharma’s mysterious injury that made the team loss. In the last ball of 18th over which was bowled by Jaspirit Bumrah Rohit Sharma met with a massive injury in the right hand. Sorry , left hand. The full toss ball was faced by Vijay Shankar went to the square area where Rohit shama was fielding. In an attempt of catching the ball which went straight to his hands, Rohit Sharma dived and hurted himself. Though his right shoulder placed on the ground , The skipper got hold of his left arm and been rested for rest of the balls. Throughout the innings Rohit Sharma kept getting treatment for his serious injury.

When the officials witnessed this bizarre they concluded that this mystery disease must be the reason for Rohit “The hitman”‘s poor innings in the do or die match. They also knew that Rohit has the capability of scoring double hundred even when the target was 174.

Despite three drop catches DD managed to win the match by 11 runs. In the last night Board meeting where Ambani also participated, the officials decided to qualify team Mumbai into the play offs as far as the enormous number of Mumbai fans are concerned. It will be very disappointing for half of the Indian IPL audience who are Mumbai Indians fans. It is also discovered that the financial crisis cannot be faced by the IPL management due to the elimination of Mumbai Indians as the fans will not make their presence for the match if the team is not participating in play off matches.

As the time table of Playoffs has been scheduled way earlier, the only problem now is when and with whom should Mumbai play their play off match. The issue sorted out as soon as Ambani intervened. Now it is officially confirmed that Mumbai Indians are playing their match on May 28 with the winning team of the IPL final which is going to be held on May 27.