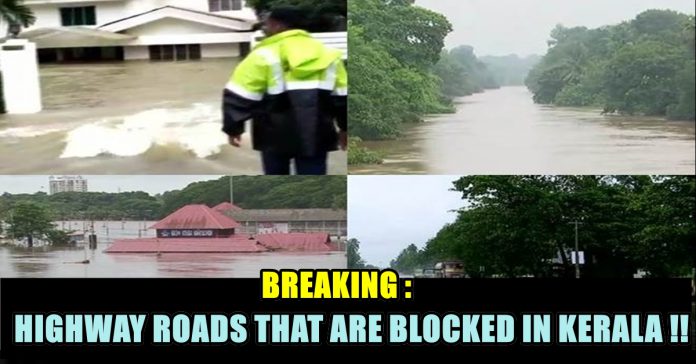 Torrential rainfall and landslides in different parts of Kerala have taken a huge toll on road connectivity in the state, stranding several people in different districts. Many who have evacuated from flood-hit residences, however, are unable to move to other districts with roads block, train lines disrupted and air services from Kochi suspended until August 26. TNM looks at some key routes and areas that have been cut off due to flooding. The worst-hit districts are Kozhikode, Ernakulam, Thiruvananthapuram, Palakkad, Thrissur, Pathanamithitta and Idukki, with access blocked along many routes due to flooding or landslides.

All National Highways including between Ernakulam and Thrissur have been facing road blocks due to waterlogging. The NH 66 from Edapally to Thrissur via North Paravur, Kodungallur and Guruvayur is currently blocked at Chendamangalam, North Paravur and Varappuzha. 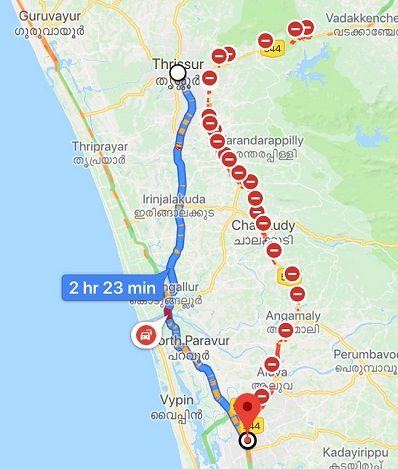 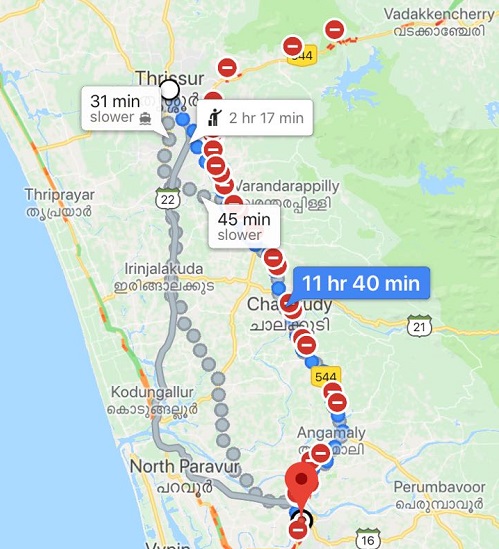 The diversion from Angamaly to Perumbavur to Kalady and then to Aluva have also been blocked due to waterlogging in areas such as Kelamattam and Vallam and Kalady. 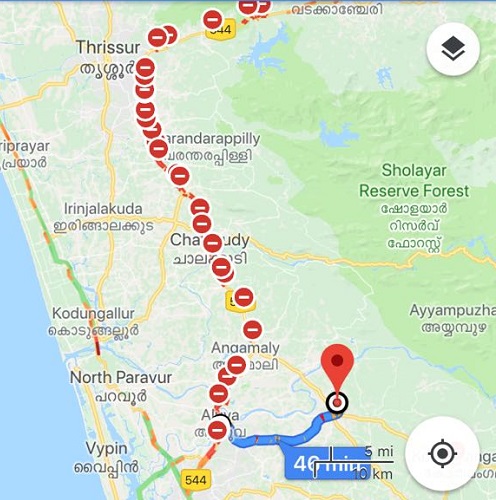 Diversion from Aluva via Perambavur to Kalady, which leads to Angamaly and Thrissur

Meanwhile, the Kochi Metro resumed services within the city from 4 pm on Thursday to help those stranded in Aluva and Company Padi to move to other areas of the city.

In Kozhikode, despite landslides in several part of the district, the Kozhikode – Karnataka National highway NH766 is open and functional according to District Collector UV Jose. 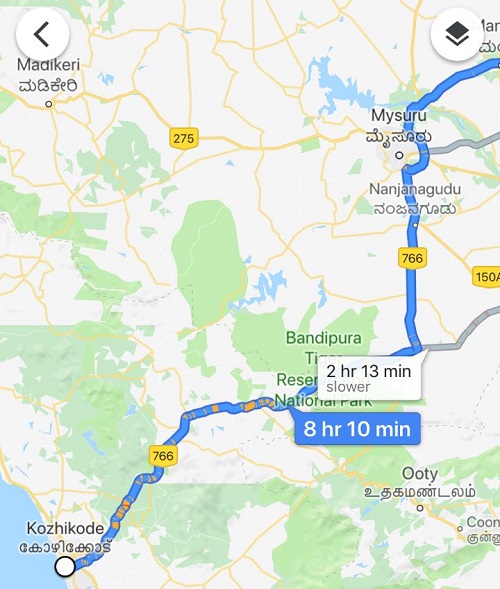 NH766 from Kozhikode to Karnataka

However, the route from Kozhikode to Wayanad in Kerala via Kuttiady Ghat has been currently blocked due to landslides in the area. 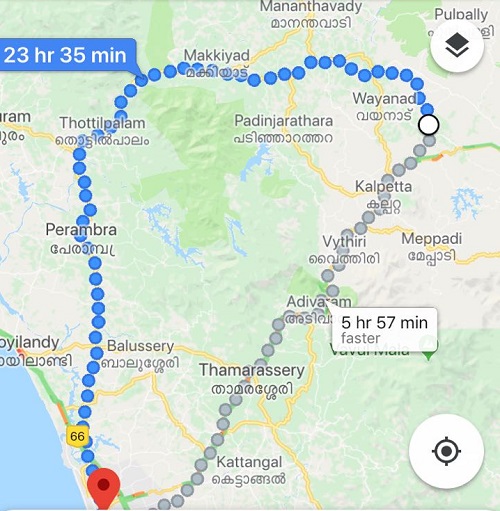 Kozhikode to Wayanad via Kuttiyadi Ghat

In Pathanamthitta – one of the worst affected districts in the floods – parts of highways are entirely blocked due to flooding. The Thiruvananthapuram–Alappuzha National Highway 183 is blocked in Chenganur, Thiruvalla and other areas which have been waterlogged. The State Highway 1 or Main Central Road running from Muvattupuzha till Thiruvananthapuram is blocked in Thiruvalla, Pandalam and Ranni in Kottayam. 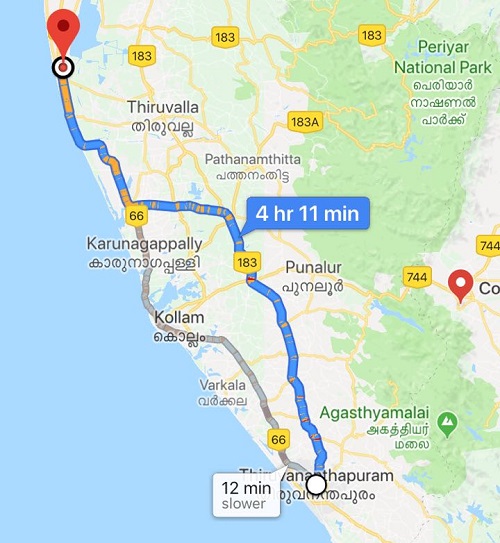 The Sate Highway 1 or MC Road from Thiruvananthapuram all the way till Kochi is blocked after Kottarakkar in Kollam following which the road passes through Chengannur and Thiruvalla in Pathanamthitta which is entirely flooded. 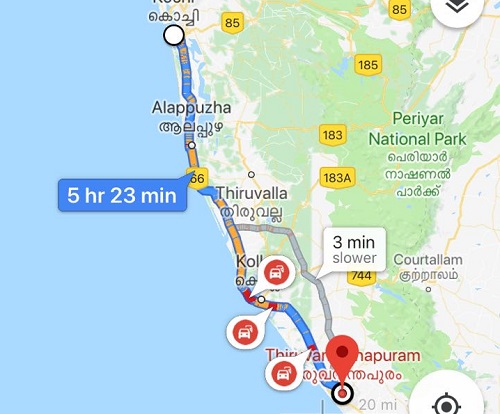 From Thrissur, the NH 47 runs via Manuthy to Palakkad. However due to intense rains over the past few days and landslides at Kuthiran Highway tunnel on NH 544, the route is completely cut-off with traffic being blocked. 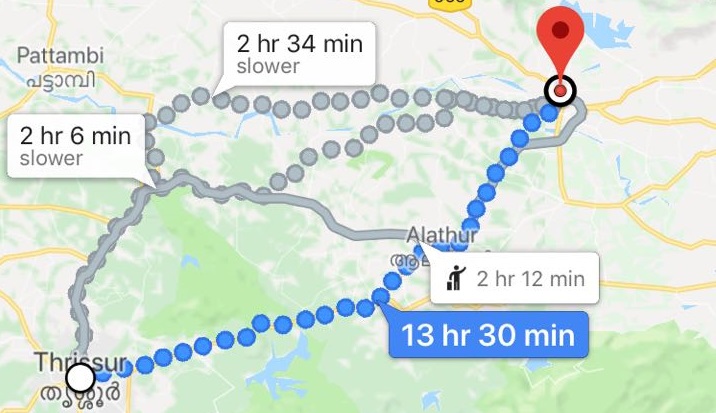 Meanwhile, the Palakkad-Thrissur road via Shoranur, which was earlier blocked, is now operational, with buses plying between Palakkad and Perinthalmana. According to reports, the Palakkaad-Chittur-Pollachi road is also open. 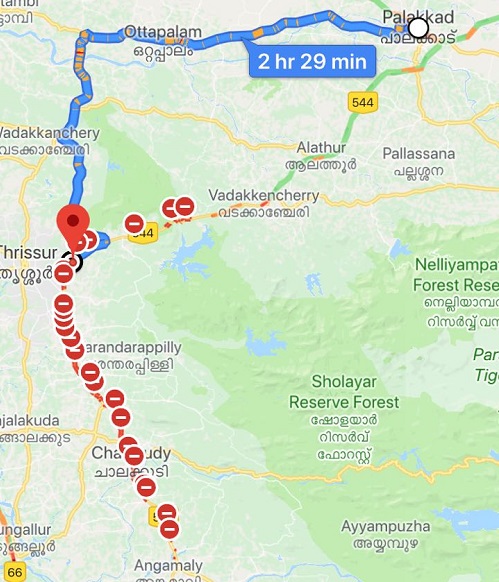 Route via perunthalmanna is operational

However, the areas on the route such as Viyur in Thrissur have been inundated due to heavy rainfall. Further the route also passes the Bharathapuzha River, which is in spate following the opening of the shutters of the Malampuzha dam, leading to traffic regulations in the area.

In Idukki, one of the worst hit districts of Kerala, the Cheruthoni-Thodupuzha road to Ernakulam remains inaccessible with multiple blocks in the area. 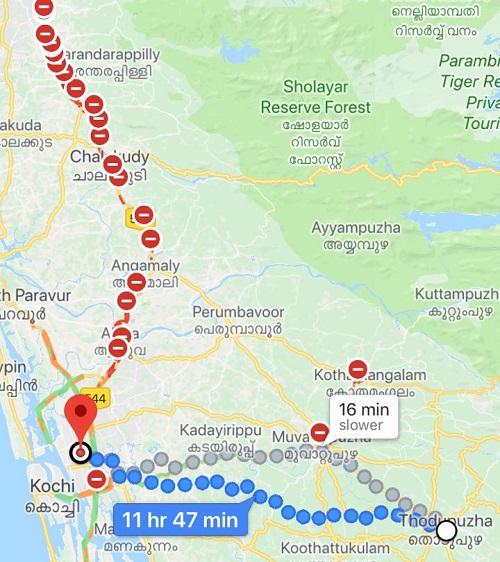 Thodupuzha to Kochi via Cheruthoni 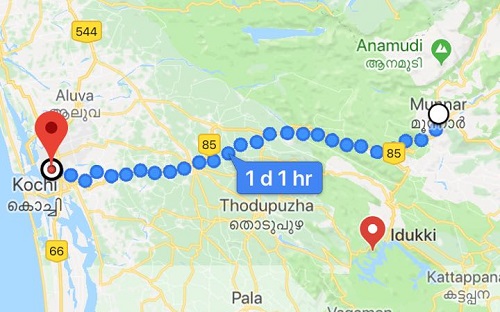