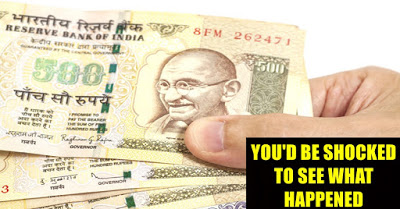 The Demonetization wave has hit everyone and it did hit hard.
With everyone going around blocks searching for free ATM’s and Banks which new stories building up everyday about how people made it in and out of banks safely there are weirder stories too. In a complaint filed by a laborer in the Greater Noida he was allegedly harmed by two thieves who tried pick pocketing him. You’d find the reason interesting too. Read more.

The man named Vikas Kumar, a labourer who works at a construction site in Greater Noida, was returning home from work at 11 in the night when he was robbed. “I was walking from the site towards the bus stand when two bike-borne men rode towards me. They snatched my purse and fled,” TOI quoted him as saying.

A more surprise came after the men who fled the scene saw the purse with 500 rupee notes. They came back and returned the purse to him after finding the purse had Rs.1500 all in 500 denominations. More was in shock for the poor laborer when one of the men slapped him for having cash in 500 denominations and not in 100.

Modi’s new rule has surely saved this man from getting his purse robbed.