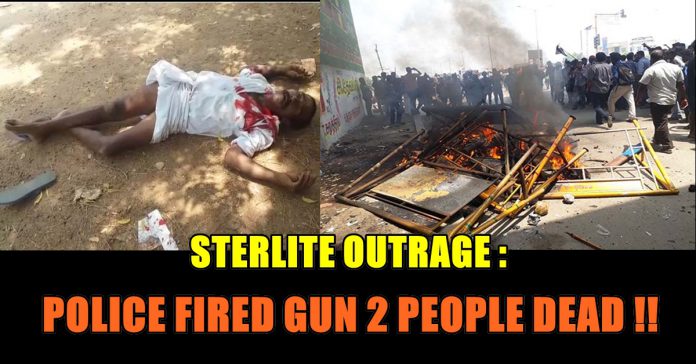 3 People dead with six others injured as police opened fire against the protesters who were on a rally towards district collectorate campus opposing Sterlite Copper unit, despite section 144 has been clamped in the town area. Owing to the Anti-Sterlite campaigners’ call for a massive protest against the operations of copper smelter here, several hundreds of protesters rallied to the collectorate campus here on Tuesday. Most shops in Thoothukudi town had downed their shutters accepting the strike call given by Thoothukudi town central traders association. District collector N Venkatesh issued prohibitory order section 144 in view of the scheduled protest, while granting permission to protest only at the SAV ground near Thoothukudi old bus stand. Paying no heed to the imposition, the public started gathering at Madathur, St Lady of snows church and other conjunctions to march towards collectorate demanding to stop operation of the copper smelter.

Over 4,000 police personnel from the nearby district have been deployed to prevent crowding proved futile, as the protesters at various areas breached the barricades and marched forward towards the collectorate.

According to Vikatan magazine, they reported that 3 people were dead on the gun fire shot by Policemen. The struggle for the Sterlite plant to be closed by the village of Kumarathetturam rural people has reached its 100th day today. Following this, a day-long struggle is taking place across Tuticorin demanding a permanent ban on the Sterlite plant. There is also a attention seeking protest in the Old Bus Station.

Major clash between protesters and police at Thuthukudi during 100th day of ‘Protest against Sterlite’. Stone pelting, tear gas and lathi charge!! pic.twitter.com/RK42sx2xQd

At Madathur, police had to resort to a mild lathicharge at Madathur to disperse the public gathering. The protesters gheraoed police vehicle at VVD signal while on their way to collectorate.

“The protests began at around 10 am today. The violence was started by the police who lathi charged us. They manhandled even children and women. We started throwing stones to protect ourselves. There were no party people or politicians involved. We are the residents of Thoothukudi who want an end to the pollution by Sterlite,” says 43-year-old Kittu, who was part of the protests.

A large number of protesters marched towards collectorate, the police hurled tear gas in order to bring the situation under control. A section of protesters managed to sneak into collectorate. However, police resorted to lathi charge to drive them away, said sources.

According to Nakkeeran , The police could not get hold of the situation. As the situation got out of control Policemen started to fire. In their Gun fire , it is reportedly said that two people were dead on spot.