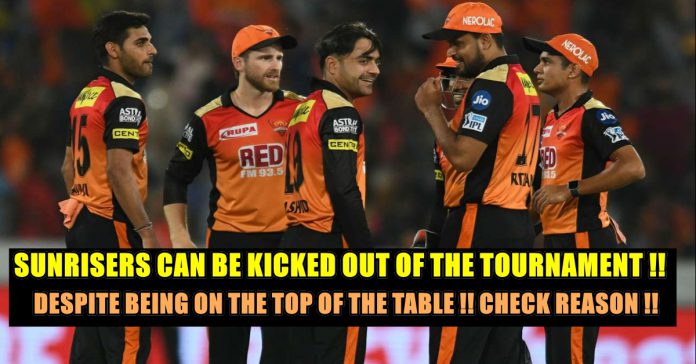 Sunrisers Hyderabad (SRH) defended the middling total of 146 runs in their last match against RCB as their bowlers are proving to be increasingly difficult to face for the other teams. They have already made light work of the scores like 118, 132 and 151 this season and are undoubtedly the strongest bowling unit. The thrilling win over Royal Challengers Bangalore (RCB) was their 8th win after playing 10 matches and are sitting pretty at the top of the points table. However, they are not certain of a playoff position yet and again still be knocked out of the tournament. As the IPL is approaching its business end at a fast pace, all the teams are concentrating on how they will be able to qualify for the playoffs. The mathematical possibilities also come into the picture and as of now, none of the teams are eliminated from the tournament. Such has been the quality of cricket being played this year as most of the matches have gone down the wire testing the heart rate of the fans. Also, there is not much difference in the net run-rates between the teams which could make things interesting going forward. Many feel that Kane Williamson and his men have qualified for the knockouts after winning the game against RCB which is not the case. But yes, they are close to making their berth certain in the playoffs and they need one more victory. But there is still a possibility that they might miss out on qualifying by losing all their remaining matches. Interestingly, the other results should also go against them to turn around their glory season into a misery. After losing rest of the matches, they will end up on 16 points after 14 matches and it will need either Mumbai Indians (MI) or Rajasthan Royals (RR) to win all their remaining games which won both of their last two games. Also, KXIP who are yet to play 4 matches should lose to KKR and MI and then has to win at least 2 games out of the remaining three which are against CSK, RCB and RR in which they lost the game against RR already. If all the above scenarios come true, then SRH, either MI or RR, KKR, and CSK or KXIP, are likely to finish with 16 points at the end of the league stage. Then the net run-rate comes into the equation which might lead to the elimination of the Orange Army. As of now, there are very bleak chances of happening it given the form they are in. They are the favourites to win the tournament but nothing could be predicted as things turn around very quickly in the tournaments like IPL.