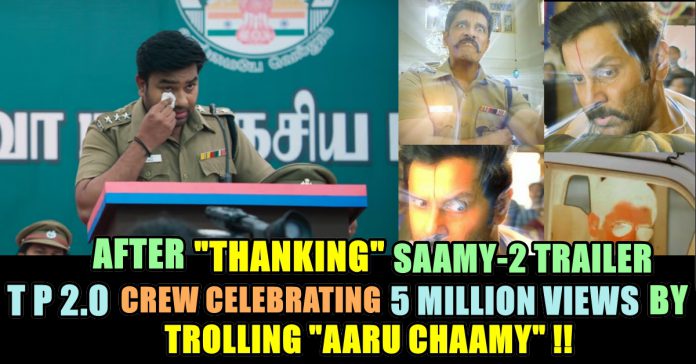 Yesterday the trailer of Director Hari’s Saamy-2 released and it had all the eligibility to become a scapegoat for the Tamizh Padam crew. The Sequel of Saamy, a blockbuster movie back in 2003 which starred Vikram, Trisha is very well known for its  engaging screenplay. But the dialogues which took place in Saamy-2 trailer is an absolute laughter and nowhere near to the dialogues of part-1. watch the trailer here:

The very day maker of the film sarcastically trolled the trailer by saying “thanks” by posting the trailer link of Saamy-2 in his twitter page. Now today the film’s production house Y not Studios released a poster which is made to celebrate their trailer reaching 5 million views in just 3 days. The poster which is clearly denotes that it made to troll the Saamy movie franchise. They also kept it as their teaser thumbnail in youtube as soon as it reached 5 million views.

Well, we all expected that the Tamil Padam 2.0 crew  is up to troll the Saamy-2 trailer but not this soon. What’s your view on the poster ??