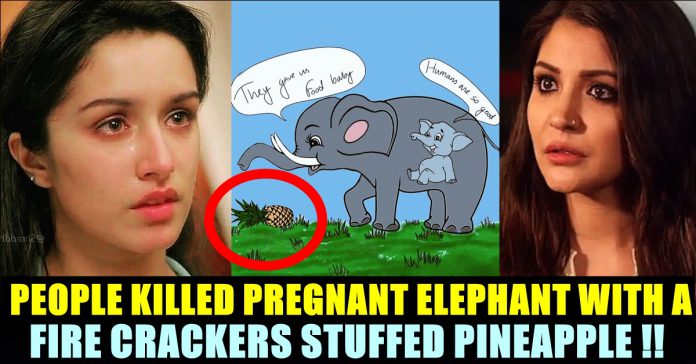 Internet users including high profile cinema artists Anushka Sharma, Shraddha Kapoor expressing their anger towards the murder of a pregnant elephant in Kerala. While activists are fighting hard to stop animals from getting abused, there are some people who are subjecting them to brutality and torture.

Locals in Kerala allegedly fed a pineapple stuffed with fire crackers to a pregnant elephant on Wednesday. The elephant died after the pineapple exploded in its mouth. The elephant’s autopsy report came out only yesterday. The wild elephant had left the forest of Silent Valley, meandering into a nearby village in search of food.

Pineapples with country made crackers are usually used by locals to protect their fields against wild boars. The fruit which was fed by the locals to the elephant, exploded in her mouth, leading to an inevitable tragedy. As the cracker’s explosion was so powerful, the elephant’s mouth and tongue were badly injured. The elephant allegedly walked around the village for days in search of food with searing pain. As she couldn’t eat anything due to the pain, she went back to the forest.

The elephant was captured standing in Velliyar river. Photos showed the elephant standing in water with her mouth and trunk in water, most probably to get some relief from the pain. Mohan Krishnan, Forest officer who shared the pictures and narrated the details said that she must have done this to avoid flies and other insects on her injuries. Krishnan wrote “She trusted everyone. When the pineapple she ate exploded, she must have been shocked not thinking about herself, but about the child, she was going to give birth to in 18 to 20 months.” Evening while bearing a searing pain, the tusker didn’t hurt any of the villagers, Mohan wrote.

Forest officials came to know about the elephant only on 25th of May, days before her demise. She died on 27th of May while standing it water despite of several efforts took by officials to rescue her. This incident created huge outrage in social media where people are fuming against the locals who fed that pineapple to her.

How??????
How can something like this happen???
Do people not have hearts???
My heart has shattered and broken…
The perpetrators need to be punished in the STRICTEST way. @PetaIndia @CMOKerala pic.twitter.com/697VQXYvmb

Will this go on in the NEWWORLD post Corona??She harmed no one, damaged nothing and yet! Human beings forget humanity while this elephant suffered for no reason. This is not an isolated case & we need to put a hard stop to this ..#alllivesmatter https://t.co/cf59ddMkN2

Disappointed from Kerala for the first time. Still in a shock! This cant be Kerala.
The people who always stand by Humanity killed a pregnant elephant.
How can someone be this brutal?

Elephant
Some inhumane behaviours makes the others looking guilty. pic.twitter.com/LO9jNe0H16

Some people are even stating that we humans deserve a virus like COVID 19 for involving in such brutal crimes. Comment your views !!