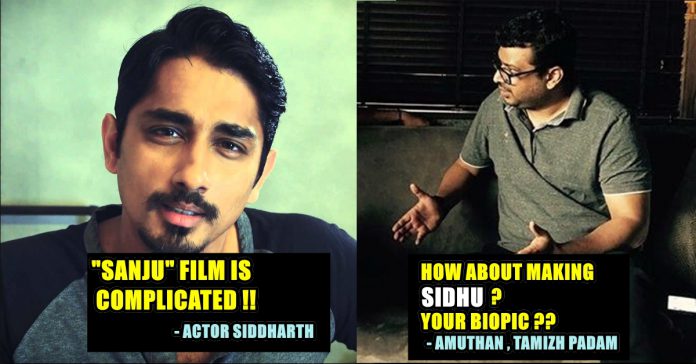 C.s Amuthan, the maker of the only Kollywood parody film franchise seems to be very active on Twitter as his film is nearing the release very soon. He also seems to have very strong connection with the fans as we can hardly see a negative comment for his tweets. The reason is nothing but his last and only film Tamizh padam which earned him a lot of followers and they also believes him to repeat the history again with the sequel of that “epic” cinema. The teaser , video song, audio, his tweets about the film’s post production process everything goes viral on the Internet which the increasing the expectation level for the film higher, especially among the online users as they have already using the teaser’s screenshot as meme templates. Meanwhile Actor Siddharth who was predominantly known as one of the progressive Actor/Filmmaker of Tamil cinema wrote his opinion about the biographical movie of actor Sanjay Dutt which is title as “Sanju”. And the movie is running successfully where so many celebrities themselves celebrating the movie including Aamir Khan by mentioning the film as one of the best bio picture of Indian cinema. Now actor Sidhharth shared an article about the film and wrote “It’s risky making image piece biopics on people alive and successful, and strange to have them participate in the films themselves, in any capacity. It has to lead to complications. Very engaging article by Shekhar Gupta. #Sanju”

It’s risky making image piece biopics on people alive and successful, and strange to have them participate in the films themselves, in any capacity. It has to lead to complications. Very engaging article by Shekhar Gupta. #Sanju https://t.co/OLQEMT32D9

For his tweet the “parody” film director who seems to be Actor Siddharth’s long time friend wrote “Machan I’m up for #Sidhu if you are.” which seems a bit kind of troll in a friendly manner. Siddharth does not missed to respond the director’s comment on his opinion about the bollywood film. Actor Siddharth said “I clearly said successful. Try again! #Modhu” which seems more like a self troll and self defense on the other side to escape from the director’s witty statement. And the conversation does not ended here. The director replied with a serioous statement where he sounded like he is truly wish Siddharth to be successful. He also says that he has a confidence to whitewash the figment of the evil media’s imagination about Siddharth. Here’s the reply of director C.s amuthan :

Unakenna korachal! But u r not hearing me. As your friend I can whitewash your story. All those conquests & flings.. a figment of the evil media’s imagination. Voila!

What do you think about the conversation between them ?